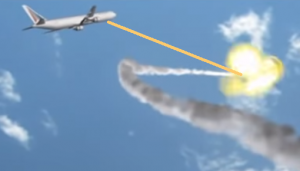 An Israeli system that protects planes from surface-to-air missiles has passed a test conducted by NATO, which could open up new markets for the technology in the alliance’s 28 member states, defense electronics manufacturer Elbit Systems said Monday.

The system, which can jam incoming heat-seeking missiles with a laser, is already in use by civilian Israeli carriers.

MUSIC, or Multi Spectral Infrared Countermeasures, is a family of high-performance, directed infrared countermeasure systems, which are integrated with other advanced, passive airborne warning systems to protect aircraft against heat seeking surface-to-air missiles and shoulder-launched rockets.

Elbit’s website describes the system as one that “integrates advanced fiber laser technology with high-rate thermal cameras and small, highly dynamic mirror turrets, to provide effective, reliable and affordable protection to all types of aircraft, under all operational conditions.”

The NATO test took place in Germany in October, when MUSIC was fitted aboard an Airbus C295 aircraft, as part of a joint project of Elbit Systems and Airbus Defense and Space (Spain).

According to Elbit’s statement, the test was supported by the Israeli Defense Ministry, the Spanish Air Force, and NATO’s Air Forces Armaments Group, whose subdivisions oversee the development and validation of air protection solutions for the North Atlantic Treaty Organization.

The Israeli defense contractor said the successful test saw MUSIC “prove its capability to detect, acquire, track and jam the trial test equipment on the ground, under extreme conditions.”

Elbit’s statement noted the MUSIC family of systems has been successfully tested by several countries, and its versions are operational on 20 aircraft models, including military and commercial helicopters, and other fixed-wing aircraft.