A flurry of satirical cartoons reverberates through the Mid-East, both congratulating Iran for its victory & hitting the US hard for capitulating on positions.

Arab media outlets responded Wednesday to the nuclear deal between Iran and world powers in typical form – satirical cartoons. The reactions to the deal were in no way consistent, and there was a clear demarcation between Sunni Arab states and the Shiite world. 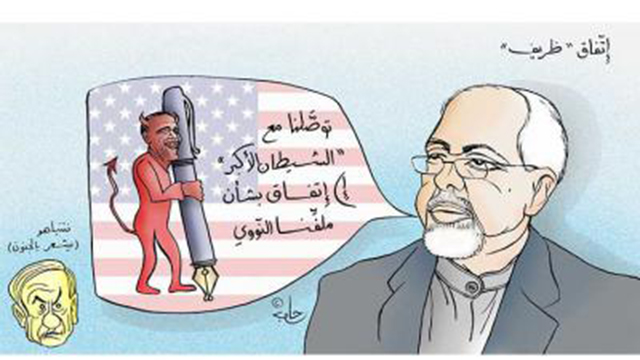 ‘Al Quds Al Arabi’: Iranian Foreign Minister Zarif announcing he has reached a deal with the “Great Satan” (US), while Netanyahu goes crazy in the corner. 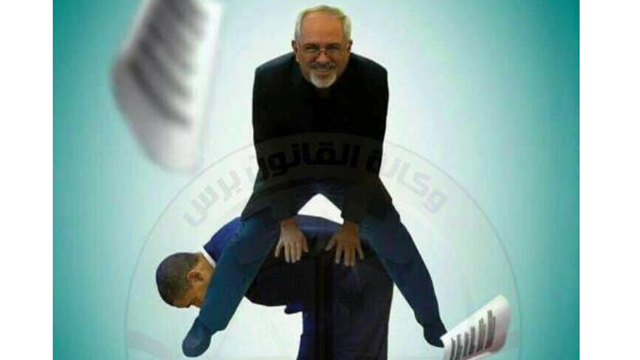 Iran jumps above Obama, from an Iraqi agency

The typically anti-Iranian Saudi newspaper Al-Okaz claimed that Tehran had received a prize free of charge: “There are many documents highlighting Saudi concerns that the deal would signify a prize for a regime that does not respect the basic value of being a good neighbor, and is constantly intervening in regional conflicts in Iraq, Syria, Lebanon, and Yemen.”

Another Saudi newspaper, Al-Watan, wrote that releasing the financial pressure caused by the sanctions would have disastrous consequences. The paper added that in a polarized world in which Obama and his government surrendered to Iran, the Gulf States must look for new alliances. 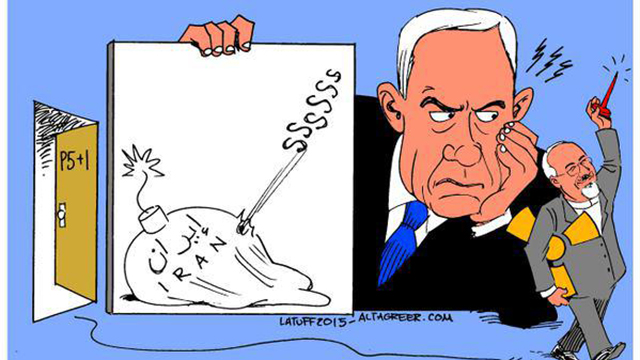 A caricature by Carlos Latuf, one of Israel’s greatest detractors. 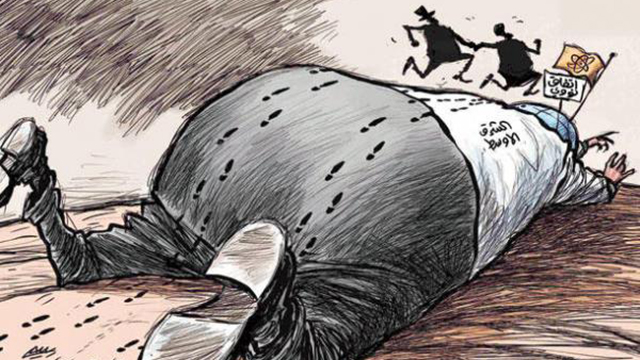 The Saudi newspaper ‘Asharq Al-Aswat’. Stepping over the Middle East on the way to a deal.

The inter-Arab newspaper Asharq Al-Aswat, which goes to press in London, tried to present Iran as the loser, in that most of its original demands were not met: “Disregard the propaganda in the Iranian media,” the paper’s editor, Salman Ah-Dusri, wrote. The stance was reflected by Kuwaiti papers as well. 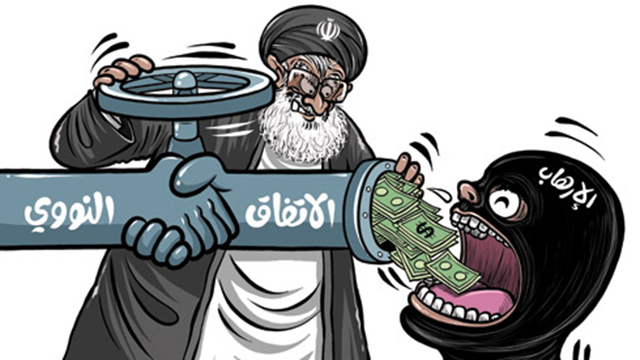 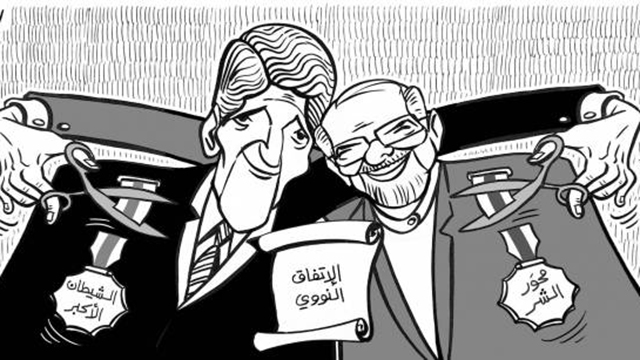 The Lebanese newspaper ‘Al Nahar’: Kerry and Zarif sign the Iran deal and cut off the previous labels they placed on each other: The Great Satan (US) and Axis of Evil (Iran)

The Lebanese newspaper Al-Ahbar, which serves as Hezbollah’s de facto news outlet, celebrated the Iranian achievement. The paper’s headline was written in Farsi: “We Can,” similar to the slogan used by Khomeini in his revolt against the shah, which led to the Islamic Revolution in Iran. “Iran won the nuclear battle,” the paper wrote, “Arab excitement and Israeli hysteria.” 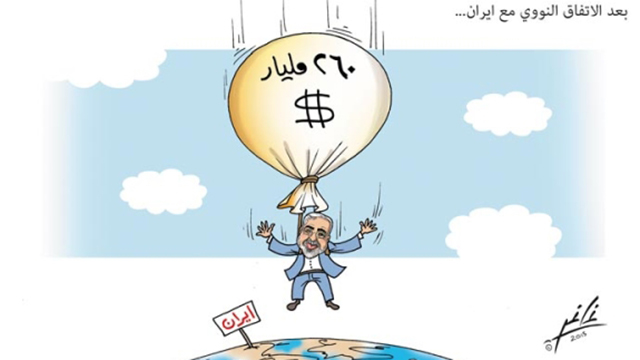 Lebanon’s ‘Al Jomhouria’: After the deal, Iran is taking the whole pot, in financial terms. 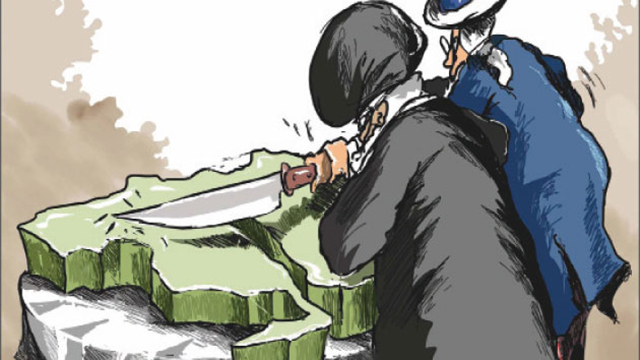 The Jordanian newspaper ‘Ah-Rad’ : The US and Iran are dividing the world 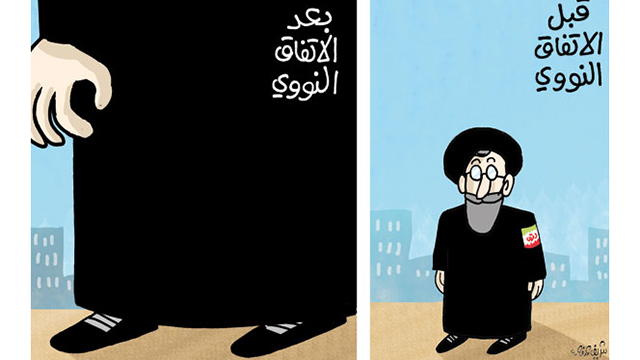 The Emirate paper ‘Al Etihad’: Little Iran before the nuclear deal (right) and big Iran after the deal (left)

The Syrian newspaper Al- Watan, which is linked to the Syrian regime, said: “After the firm stance of the Iranian people, the defensive battle of the Syrian people, the heroic actions of Hezbollah, and brave positions of Russia and China – this is a victory for the path of resistance.” 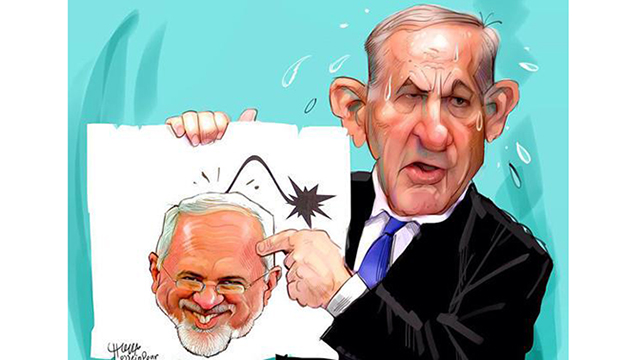 Wednesday morning saw the first signs of Iran’s return to the community of nations. German Finance Minister, Zigmer Gabriel, said it was his intention to visit Iran on Sunday in order to check the possibility of financial partnerships between the nations. French Foreign Minister Fabius also stated that he intended to visit Iran in the near future.