Global terror group al-Qaeda is in need of new recruits and like all other modern enterprises, if the buddy system fails – online message boards just might do the trick.

According to a Tuesday report in Yedioth Ahronoth, the terror group posted an employment opportunity in June, on a message board known as a restricted forum frequented by radical Islamists. The position offered – “suicide bomber.” 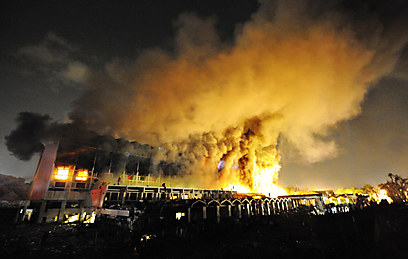 The Arabic want-ad announced a Jihadist workshop meant for dedicated individuals interested in carrying out lone-gunmanstyle attacks and suicide bombings. The location – “global.”

The ad went into great detail as to the qualities the desired candidate should possess, listing among others “mental maturity, physical fitness, dedication, obedience and the tenacity to see the mission through.”

Potential terrorists were asked to contact several email addresses, known as fronts for al-Qaeda operatives in the Arabian Peninsula.

They were asked to and provide a résumé detailing their age, state of health, the languages they speak, any foreign passport they have and their academic achievements.

Another peculiar demand – especially considering the job title – was for candidates to detail “previous experience.”

According to the report, the advertisement read like an ode to suicide attacks: “The individual concept of Jihad, which is advocated by Jihad leaders, is becoming common knowledge. From now on, one man can carry out an entire jihad.”

The pitch goes on to explain that lone Jihadists have better chances of success and lesser chances of getting caught.

The ad also refers interested candidates to a video offering more details on lone-gunman style attacks, titled “You alone are responsible for yourself.”

However, the job is not meant for everyone: Those with authority issues need not apply, as all potential suicide bombers will be subjected to the supervision of a military council, which will oversee their rigorous training; as well as decide on their intended target.

The al-Qaeda ad stressed that the organization will supply each “Jihad warrior” with the relevant information of their operation.

The terror group also stressed that the targets will only be “individuals who fight Islam and Muslims, as well as the enemy’s military, financial and communications facilities.”

The targets in question were prioritized to include “targets in America, Israel, France, Britain and heretics on Muslim soil.”

Many of the forum’s members expressed interest in the ad, and one even suggested adding Germany, Denmark and Sweden to the list, but cautioned members not to share their skills online, as the information might “end up in enemy hands.”