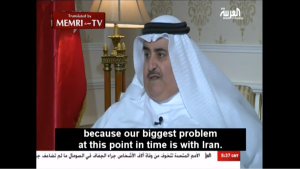 During an interview with Saudi Arabia’s Al-Arabiya TV last Tuesday, Foreign Minister Khalid bin Ahmed Al Khalifa said that Iran is currently the coastal kingdom’s “biggest problem” and added that his country will not “hesitate to defend” itself if necessary, according to a report by the Middle East Media Research Institute (MEMRI).

The statements come on the heels of a recent motion enacted by Bahrain, Saudi Arabia and its Arab League allies to list Lebanese based Shi’ite militia group Hezbollah a “terrorist organization.”

Bahrain broke off formal relations with Iran, Hezbollah’s major backer, in January of this year

“We wanted to convey a message to Iran and to all its satellites in the region that we are serious in confronting them,” Al Khalifa said when asked what “was the practical outcome” of distancing itself from Hezbollah and the Islamic Republic.

“By no means will we hesitate in defending our countries, our peoples, our interests and our brothers in the region,” he added.

As the discussion draws to a conclusion, the interviewer asks: “Are you saying that Iran is more dangerous than Israel to the Gulf states?”

“Look, we wish to have good relations with both, but under the current circumstances and challenges, the Iranian danger is what we see before our eyes,” Al Khalifa responds.