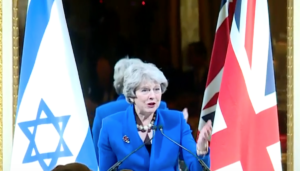 Speaking at a celebratory dinner to mark the centenary of the Balfour Declaration in London, May said that that the British government was proud to support Israel.

The dinner was hosted by Lord Rothschild and Lord Balfour. Prime Minister Binyamin Netanyahu and Rabbi Ephraim Mirvis, the Chief Rabbi of the United Hebrew Congregations of the Commonwealth, were in attendance.

In her remarks, May noted that “Balfour wrote explicitly that ‘nothing shall be done which may prejudice the civil and religious rights of existing non-Jewish communities in Palestine, or the rights and political status enjoyed by Jews in any other country.’”

“So when some people suggest we should apologize for this letter, I say absolutely not,” she continued.

Portrait of Lord Balfour, along with his famous declaration. – Photo: Wikimedia

“We are proud of our pioneering role in the creation of the State of Israel. We are proud to stand here today together with Prime Minister Netanyahu and declare our support for Israel. And we are proud of the relationship we have built with Israel. And as we mark one hundred years since Balfour, we look forward to taking that relationship even further,” said May.

“As Prime Minister Netanyahu and I discussed in Downing Street earlier today, we want to deepen our links in areas where Israel is leading the world – in areas like agriculture, health, science, technology and innovation,” she added, noting that “Israel is the true start-up nation and we are proud to be your partner.”

May also stressed that Britain remains “absolutely committed to Israel’s security” and “will always support Israel’s right to defend itself.”

At the same time, the British Prime Minister said that “we must, I believe, seize this opportunity to renew our resolve on what is still to be achieved.”

“For sadly, Balfour remains unfinished business – as his fundamental vision of peaceful co-existence has not yet been fulfilled. And I believe it demands of us today a renewed resolve to support a lasting peace that is in the interests of both Israelis and Palestinians – and in the interests of us all,” she continued.

May called for a “peace deal that must be based on a two-state solution, with a safe and secure Israel alongside a viable and sovereign Palestinian State.”

In order to have a realistic chance of achieving this goal, she said, there must be “an end to the building of new settlements and an end to Palestinian incitement too.”

“Put simply, there can be no excuses for any kind of hatred towards the Jewish people. There never has been – and there never will be,” stressed May.