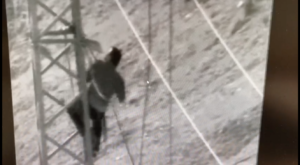 The footage was accompanied by a post translated into Arabic, which said, “The Hamas terrorist organization continues to steal from the Gaza Strip. It was reported yesterday that forces from the Hamas terrorist organization arrived at the border of the Gaza Strip at 4:30 pm to an area where an electricity line passes, and used the line to connect to electricity pirated from the transmission system , for purposes of terrorism.”

“This is electricity intended for hospitals and schools, but Hamas is not interested in the population, and even oppresses it.”