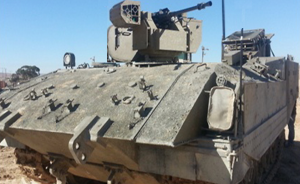 IDF’s newly integrated Drakonit system will permit its soldiers to fire at targets up to 1.5 kilometers away without having to exit, or expose themselves on their armored vehicles, providing the soldiers with optimum protection.

The IDF Ground Forces’ Technological Brigade have begun installing in recent months the “Drakonit” computerized firing network in “Achzarit” APCs, which are used in regular and reserve infantry brigades, and on the Combat Engineering Corps’s older “Puma” armored vehicles.

The Drakonit, manufactured by Elbit, allows the operation of a heavy machine gun on the roof of armored vehicles directly from the fighter’s box without the soldier needing to extend their body outside and thus endanger themselves.

Dual cameras for day and night are affixed to the outside of the Drakonit system, as well as a small radar that detects suspicious movements in the field and allows the force inside the APC to lock on and shoot at a target.

In addition, the Drakonit is outfitted with a system that allows marking and maximum precision for targeting. The target is identified at high resolution with the cameras at a nearly full radius of the APC, and its firepower is efficient up to a distance of 1,500 meters.

Target is identified by high resolution cameras at nearly full radius of the APC. – (WATCH Video Below)

The Drakonit will be especially effective for routine security missions and ground maneuvers, and its installation on older APCs shows a lesson learnt from Operation Protective Edge.