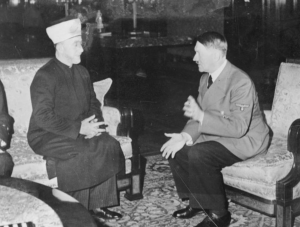 Palestinian Mufti Al-Husseini may not have initiated the Holocaust as PM Netanyahu intimated, but his incitement then played a very major role in the Jewish genocide, and is identical to the ideology of the Palestinian movement today.
• WATCH Short historical film documenting the Palestinian-Nazi connection.

Prime Minister Binyamin Netanyahu has drawn much flack for saying that the Mufti of Jerusalem gave Hitler the idea of exterminating European Jewry – but there is in fact much evidence of the Mufti’s very significant involvement in the diabolical scheme.

Speaking to the 37th Zionist Congress in Jerusalem on Tuesday, Netanyahu wished to show that the desire to kill Jews among Palestinian Arabs did not begin today. Netanyahu told the Zionist Congress that attacks on Jews in the 1920’s “were instigated by a call of the Mufti of Jerusalem, Haj Amin al-Husseini, who was later sought for war crimes in the Nuremberg trials because he had a central role in fomenting the finalsolution.”

Netanyahu said that Hitler didn’t yet want to exterminate the Jews, but wished rather to expel them but “al-Husseini went to Hitler and said, ‘If you expel them, they’ll all come here [to the Land of Israel.’ “So what should I do with them?” he asked. He said, `Burn them.` And he was sought during the Nuremberg trials for prosecution.”

Coincidentally, MEMRI (Middle East Media Research Institute) publicized just today remarks by a leading Islamist cleric on the official TV station of Hamas, in which he said that Hamas would “not leave a single Jew, dead or alive… on the land of Islam and the Muslims.”

After a public outcry against Netanyahu for implying that Hitler was less than responsible for the Holocaust – Arab MK Ahmed Tibi even said sarcastically that Netanyahu might actually be a Holocaust denier – the Prime Minister clarified his remarks, and even added some important historical context.

On his way to Berlin to meet with German Chancellor Angela Merkel this afternoon, Netanyahu said at the airport that though it is absurd to assume that he intended to absolve Hitler of responsibility for “his diabolical destruction of European Jewry, it is equally absurd to ignore the role played by the Mufti, Haj Amin al-Husseini [in] encouraging and urging Hitler, Ribbentropp, Himmler and others to exterminate European Jewry.”

Netanyahu quoted the testimony of Adolf Eichmann’s deputy at the Nuremberg trials after World War II, who said: “The Mufti was instrumental in the decision to exterminate the Jews of Europe. The importance of his role must not be ignored. The Mufti repeatedly proposed to the authorities, primarily Hitler, Ribbentropp and Himmler, to exterminate the Jews of Europe. He considered it a suitable solution for the Palestinian question.”

Eichmann’s deputy also said: “The Mufti was one of the instigators of the systematic extermination of European Jewry, and was a partner and advisor to Eichmann and Hitler in carrying out this plan.”

Israel & Stuff suggested videos – Please Share!THE NAZIS AND THE PALESTINIAN MOVEMENT – Traces the history of PLO/Fatah, now better known as the ‘Palestinian Authority,’ the organization that will govern a future Palestinian State. The video shows how PLO/Fatah emerged from the German Nazi Final Solution. Hajj Amin al Husseini, father of the Palestinian Movement, creator of Fatah, and mentor to Yasser Arafat and Mahmoud Abbas, was co-director with Adolf Eichmann of the death camp system that exterminated between 5 and 6 million European Jews in WWII. – from FACESHIRHOME

The book Nazis, Islamists, and the Making of the Modern Middle East, by Barry Rubin and Wolfgang G. Schwanitz (Yale University Press), details the “lasting political alliance [that] was forged among Third Reich leaders, Arab nationalists, and Muslim religious authorities” and “the full scope of Palestinian leader Amin al-Husaini’s support of Hitler’s genocidal plans against European and Middle Eastern Jews.”

Israel’s public TV station broadcast on its central Mabat news program this evening a historian who stated emphatically that it was the Mufti who suggested to Hitler to exterminate the Jews.

“My intention was not to absolve Hitler of his responsibility,” the Prime Minister said, “but rather to show that the forefathers of the Palestinian nation, without … the so-called ‘occupation’ … and without settlements, even then aspired to systematic incitement to exterminate the Jews. Unfortunately, Haj Amin al-Husseini is still a revered figure in Palestinian society, he appears in textbooks and it is taught that he is one of the founding fathers of the nation – and this incitement that started then with him, inciting the murder of Jews, continues [today]. Not in the same format, but in a different one.”

Even if it was Hitler himself who came up with the idea of exterminating Jewry, it is important – in light of the support shown by PA leaders for the current wave of murderous terrorism – to understand the decades-old roots of Arab support for killing Jews.