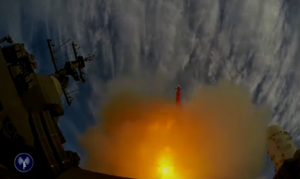 In a joint Israel & Indian development project that is due to become officially operational in both navies within a year or two, the missile is currently installed on at least one Israel Navy ship, and on an Indian Navy ship.

The Israel Navy and Israel Aerospace Industries (IAI) carried out the first successful interception test of the next generation Barak 8 missile system on Thursday, which is designed to protect naval ships and offshore gas rigs from hostile aircraft, missiles, and rockets.

In the test, the navy’s INS Lahav, a Sa’ar 5 class corvette, positioned just south of Haifa, launched a Barak 8 missile from its deck, striking and destroying a jet powered, fast moving drone at 7 am.

It was the first time that the missile launched from a ship deck, Brig.-Gen. Eli Sharvit, chief of navy staff, told reporters.

The system’s advanced digital phased array radar, dubbed Barak Adir by the navy, is produced by IAI, the prime contractor. IAI also makes the system’s the fire control station, while the interceptor missile is produced by Rafael.

The project has been in joint Israeli and Indian development in recent years, and is due to become officially operational in both navies within a year to two years, Sharvit said.

He described the drone as a challenging target to hit, adding that the Bara Adir radar had no trouble detecting and tracking it, before ordering a Barak 8 missile to launch at the target.

“The introduction of this missile system will significantly enlarge our defensive range, which until now has been close-range,” he said, referring to the Barak 1 currently on board navy ships. “It will enhance our naval superiority,” the officer added.

“It significantly increases the range we can intercept attacking planes and missiles,” Sharvit said. The navy is preparing to install the system on German-made Sa’ar 6 Magen ships, when these are delivered to the Israel Navy, for the purpose of defending offshore gas sites.

Boaz Levi, IAI corporate VP and General Manager of the Systems, Missiles and Space group, said the Barak 8 radar can detect threats at over 100 kilometers, adding that it could become fully operational in a matter of months.

“Our clients today received a demonstration of the incredible capabilities of the Barak 8,” he told The Jerusalem Post by phone.

Once airborne, the missile continues to receive data from the radar system, which predicts the threat’s trajectory, and enables the missile to adjust its own path, before destroying the target. The missile deploys its own electromagnetic sensor as it approaches the target, guiding it on its last phase.

The radar can track multiple targets simultaneously, Levi said, dividing its energy to cover half a sphere around a naval ship.

The system is “already installed on at least one Israel Navy ship, and on an Indian Navy ship,” he noted.