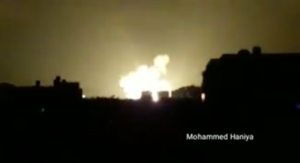 IAF F-35i “Adir” stealth fighter jets were reportedly used in the strike on Hamas targets.
– Palestinian media reports injuries resulting from the IDF strike, with one person rushed to Gaza hospital.
– IDF Spokesperson after the strike, “Israel holds the terrorist organization solely responsible for activities on the Strip.”

“Israel holds the terrorist organization solely responsible for activities on the Strip,” stated the IDF after the strike.

According The Jerusalem Post‘s sister site Maariv, citing Palestinian media, there were a number of injuries resulting from the IDF strike, and one person was rushed to Al-Shifa Hospital located in Gaza City.

A spokesman for Hof Ashkelon regional council said that alarms were also sounded in the nearby villages of Zikim and Carmia on Tuesday evening. Military forces were dispatched to scan the area.

This summer marks three years since Operation Protective Edge, in which thousands of rockets, mortars and other projectiles were launched from Gaza towards Israel and the IDF caused extensive damage with air and ground offensives, aiming to eliminate the terrorist threat. The war lasted 50 days and saw 68 soldiers, and five civilians killed on the Israeli sides and upwards of 2,000 killed on the Palestinian side, more than half claimed by Israel to be combatants.

Since then Israel has held Hamas responsible for all fire from Gaza and customarily reacts by carrying out air strikes on the group’s bases and infrastructure.