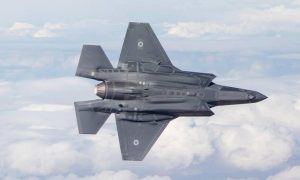 Israel became the first country after the US to receive the American-built jets, which will increase its ability to attack distant targets.

The main unique capability of the plane is its ability to fly over enemy territory without being identified by radars. Moreover, it is able to carry 16 tons of bombs, missiles and fuel.

In total, Israel is set to receive 50 such planes (F-35A), named Adir by the IAF, with deliveries taking place over the course the next few years, with the last arriving by the end of the decade. Together, they are set to form two squadrons.

Additionally, for the first time in history, the F-35 will participate in Israel’s Independence Day aerial demonstration.

Though the government has not released exact figures for the price, at approximately NIS 387 million ($100 million) per airplane, these fighter jets will likely set Israel back almost NIS 20 billion ($5 billion), not including the costs of additional maintenance and support equipment.