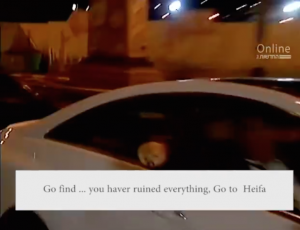 Salam told the Israeli business newspaper Globes that “on a regular weekend, 20–30,000 Jews come to Nazareth, but yesterday there were none. One a regular weekend, they [the Jewish visitors] spend a minimum of 10 million shekels. Yesterday not one shekel was spent.”

The impact has been devastating.

“Restaurants are closed. Businesses are closed. They [the business owners] come to the municipality and weep,” said the mayor, noting that it will now take months to return business to where it was before the most recent outbreak of violence.

Salam blames the situation not on the Jewish state, but on fellow Arab leaders who are fomenting strife between the nation’s Jews and Arabs.

Check out what the Mayor of Nazareth said to one Arab MK … this needs to be shared worldwide !!

Arab Members of Knesset are holding regular rallies in Nazareth, Israel’s largest Arab town, during which rioting is the norm. According to Salam, the Arab lawmakers just want to get on camera, but the city of Jesus’ youth is paying the price.

“I’m sick of them,” a frustrated Salam stated. “They should work for the benefit of those who elected them. I have told these Knesset members to leave Nazareth, to leave us alone.”

Indeed, just hours earlier, Salam was driving through the center of Nazareth and interrupted a live Channel 2 News interview with the head of the United Arab List, MK Ayman Odeh (seen fifth from the left in the above photo).

In the live broadcast, the mayor could be heard shouting at a shocked Odeh, “Take your ‘business’ elsewhere. …You have destroyed our city. …Not one Jew came [to Nazareth] today. Not one! …Shut up and get lost!”

Bishara Shlayan, a Nazareth Christian who proudly reached the rank of captain during his voluntary service in the IDF, praised Salam in a Facebook post.

“We the majority are against these demonstrations in Nazareth and in the entire Arab community,” insisted Shlayan. “We oppose racism, and call for a strong police presence to protect us.”