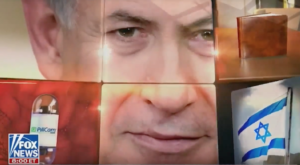 The hour-long interview focused mainly on Netanyahu’s personal life and his time living in the U.S. in his youth. Asked why he decided to leave the U.S. and return to Israel to serve in the military, Netanyahu explained that it didn’t even occur to him not to return. “I never thought of my life as separate from the life of my people. I think they’re intertwined. I always thought that you have to have a balance between individual ambition and collective responsibility,” he explained.

He added that when he did report for military duty, he brought with him to Israel what he described as American values. “Initiative, meritocracy, these are strong values. That the way you advance is through merit; that society should be open to all to compete; that if you invest effort and ingenuity you are likely to succeed. These are strong American values that resonate in Jewish values.”

He went on to describe one of the most profound turning points in his life – the death of his older brother Yoni Netanyahu during the 1976 Entebbe hostage rescue operation. In a heartbreaking account, he described the agony of having to break the news to his parents.

“When my younger brother called me and told me that Yoni had been killed in Entebbe, and I had a premonition that he would tell me that, it was as if my world had collapsed,” he said. “He was an exceptional human being and turned out to be an unbelievable leader. There was nothing pompous about him. He never played the part, he was the genuine article.”

“He didn’t die to become a legend, he was a legend already in his life,” Netanyahu said of his brother, adding that if it weren’t for the death of his brother at the hands of terrorists, he would not have entered politics.

“There’s no question that Yoni’s death in Entebbe changed my life and steered it to its present course. I didn’t know it at the time, but I felt that I had to do something about this scourge of terrorism,” he said. “The public battle against terrorism became a calling.”

“People who deliberately murder babies or blow up buses they don’t have freedom on their minds. They’ll trample their own people once they get into power, which they do, invariably,” he concluded.

Netanyahu also addressed the challenges he faces as a politician in the modern age. “What you have on the internet is this thing of instant referendums. You have political leaders who are constantly bombarded by polarized opinions. It’s not a good thing. It’s inevitable, it’s there, we work with it, we understand it, but I like the idea of representative government. You’re elected, you’re given a period to exercise that power, and then they can throw you out.”

“The problem today for politicians is not being disconnected, it’s being overly connected. It’s that they’re completely at the mercy of these shifting tides of opinion that are reflected on the net. That’s not good.”