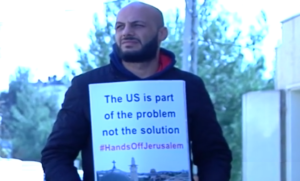 Angry Palestinian protestors confront a visiting American delegation in Ramallah, chanting “US is the problem – not the solution,” as they hurl eggs at the NYC Council members.

Arab demonstrators hurled eggs at an American delegation, including members of the New York City Council, as the delegation visited Ramallah on Thursday, as part of a demonstration against President Donald Trump’s declaration recognizing Jerusalem as Israel’s capital.

Members of the American delegation were visiting a Palestinian Authority polling firm Thursday, AFP reported, when anti-US protesters gathered outside.

Chanting slogans against the US and President Trump’s decision to relocate the US embassy to Jerusalem, the demonstrators held up placards reading “The US is part of the problem, not the solution”, and “Jerusalem is the Capital of Palestine”.

As the delegation left, protesters attempted to surround the minibus, and chased the vehicle as it left the scene.

Eggs flash across the screen at 1:12

Shortly afterwards, the US State Department responded to the incident, condemning the protesters.

“The United States absolutely opposes the use of violence or intimidation to express political views,” the State Department statement said. “This type of action is unmistakably counterproductive to Palestinian interests; it serves only to ensure that Americans are unable to hear or consider Palestinian perspectives.”