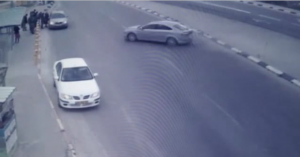 MDA EMTs and paramedics are providing medical treatment to a 28 year old woman in advanced stages of pregnancy who suffered a panic attack. No injuries were reported. The driver of the vehicle was shot and is being treated by an IDF medical team.

Earlier it was released for publication that the GSS together with the IDF and Israeli police captured two terror cells which were planning attacks in the region of A-Ram near Jerusalem and at El-Aroub south of Gush Etzion.

The first cell belonged to the El-Aksa brigade, the miltary arm of the Fatah organization and they had performed numerous acts of terror in the A-Ram region near Jerusalem.

The GSS investigation revealed that the members of the cell, residents of A-Ram, had thrown an pipe bomb which injured two security personnel last October and had been involved in other attacks including Molotov cocktails, pipe bombs and stones at security forces. They also intended to carry out shooting attacks on security forces.

The second cell was comprised of Hamas terrorists from the El-Aroub refugee camp in the Hevron region. The cell intended on performing shooting attacks on civilians and IDF soldiers travelling on Road 60, the main road connecting between Gush Etzion and Hevron.