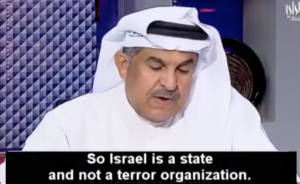 “Like it or not, Israel is an independent and sovereign state,” Abdullah Al-Hadlaq said. “It exists, and it has a seat at the United Nations, and most peace-loving and democratic countries recognize it.”

The countries that don’t recognize Israel, Al-Hadlaq said, are “the countries of tyranny and oppression,” citing North Korea as an example.

The interview, translated by the Middle East Media Research Institute, was posted on Facebook by both MEMRI and Alrai TV. Al-Hadlaq was assailed in Alrai TV’s comments section, but praised on MEMRI’s page, as viewers expressed shock and thanked the writer.

“Finally, an Arab thinker and writer who lives in the real world, recognizes the real world and believes in common sense,” wrote one commenter.

Al-Hadlaq expressed admiration for the Jewish state, its values and its institutions. Specifically, he cited the 2011 Gilad Schalit prisoner swap, in which Israel traded 1,027 Palestinian prisoners for one Israeli soldier, who had been held in captivity for five years in Gaza, as an example of the value Israel places on the lives of its people.

He pushed back at the narrative that Jews plundered Israel from the Palestinians, citing Quranic verses to back his case.

“When the State of Israel was established in 1948, there was no state called ‘Palestine,’” he said.

“There is no occupation,” he added. “There is a people returning to its promised land.”

The land of Israel was promised to the Jews by “Allah,” Al-Hadlaq said, even going as far as to implicate the Palestinians of doing the plundering themselves.