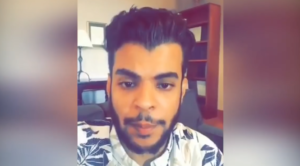 Covert cooperation with Israel against the common foe of Iran, along with the support of some Palestinian Arab factions of the Tehran regime, have encouraged the Saudi leadership to push the PA to accept a negotiated peace with Israel, even on terms less favorable than previous offers.

According to a bombshell report in December, Saudi Arabia is even weighing its own peace agreement with the Jewish state without the establishment of a Palestinian state or final status agreement between Israel and the PA – a fundamental shift in the kingdom’s position.

The cooling ties between the Saudis and the PA may also reflect a broader frustration within the kingdom for its erstwhile client.

While public polling is far less common in the kingdom than in the West, and domestic media outlets constrained by state regulators, one Saudi blogger’s recent viral video reflected the changing relationship between the PA and Saudi Arabia.

In the video, a two-minute rant, the blogger slams the PA as a “pigs” and “dogs” who have lived off of Saudi petrodollars without showing even the slightest appreciation.

“This message is for the Palestinian pigs who only know how to curse and defame the Kingdom of Saudi Arabia and its citizens.

“With all due respect to the Palestinian Arab minority, you’ve been milking our economy for decades. We’ve given you billions upon billions of dollars. Our citizens needed that money, but it went to you.

“You’re more hostile towards us than the Israelis are. You wish more for our destruction than you Israel’s. You wish upon us the most horrible curses a person can conceive of.

“You are the ugliest page in our history – like a bad memory that we’d like to forget. We want to tear this page out of [our history] and get rid of it completely, now and forever.

“We’ve had to sacrifice having ties with Israel – the most advanced country in the Middle East because of you and your problems and your use of our religion, language, and the fact that you’re Arabs [to demand our support].

“Go to hell, you and your whole ‘crisis’. Your situation doesn’t interest us anymore at all. We’re the Kingdom of Saudi Arabia, and we have nothing to do with you.”