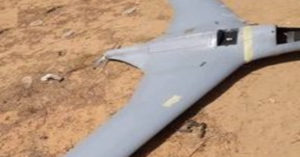 The two drones were shot down at the end of July. One was recovered by troops some 40 km. southwest of the Libyan capital of Tripoli in the small town of al-‘Aziziya, while the other was recovered in the Sidra district, home to the war-torn country’s largest oil depot.

Until now i am surprised that no one ever highlighted the presence of Israeli/Azerbaijan-made Orbiter-3 UASs which was supplied to #GNA by #Turkey and two of them was downed by #LNA so far! this video is for the second downed one in #Khelat_AlFergan Southern #Tripoli. pic.twitter.com/2EAHLRLztR

While the United Nations Security Council has repeatedly renewed the arms embargo on Libya since 2011, according to reports the two drones were part of a three-unit donation by Turkey to the United Nation-recognized Government of National Accord (GNA) which is fighting to prevent Tripoli from being taken by Haftar’s LNA.

Manufactured by the Israeli drone company Aeronautics, the tactical Orbiter 3 UAV is a compact, light-weight system for use by military and homeland security officials. It has an operating range of up to 150 km. and can stay up to seven hours in flight on intelligence, surveillance, target acquisition and reconnaissance (ISTAR) missions.

It has both day and night vision channels and also carries a three-sensor electro-optical camera with significant tactical capabilities.

The fully autonomous, highly transportable system can be assembled within a few minutes, is launched using a catapult and lands with the help of a parachute and airbag.

It has been adapted to both ground and marine environments and can carry payloads up to 5 kg. in weight, including multi-sensor stabilized electro-optic payloads carrying laser target-designation systems. The company’s latest variant has a digital datalink for operators.

The system is operated by customers all over the world, who sign an agreement not to sell the UAV to a third party.

Aeronautics, which had it’s export license reinstated in February after a two-year suspension, denied knowing anything about the incident in Libya.

The suspension came following a report by The Jerusalem Post’s sister newspaper Maariv that a team belonging to the company arrived in Azerbaijan to finalize a contract for the sale of its Orbiter 1K UAV, when they were asked to strike an Armenian military position in violation of Israeli law.

The Orbiter 1K is a loitering suicide drone capable of carrying a special one to two km. special explosive payload. Highly transportable, the vehicle-mounted UAV can fly for 2-3 hours carrying a multi-sensor camera with day and night capabilities.