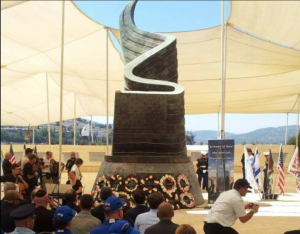 Hundreds of Americans & Israelis gather at the Israeli Memorial to remember the victims on the 15 year anniversary of attacks in New York, Washington, and Pennsylvania.

A memorial ceremony for the victims of the September 11th, 2001 attacks is being held at the Jewish National Fund 9/11 Living Memorial.

“On September 11th, 2001, Americans showed a great courage and bravery, risking and giving their lives to save people that they never met. This is a courage that Israelis can understand. The soul of a free people will always rise over hate. Liberty will always triumph, because people fundamentally want to be free.”

MK Michel Oren, former Israeli Ambassador to the US: