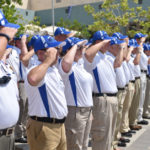 During the US delegation’s stay based at the Beit Shemesh police academy, they will participate in multiple counterterrorism training exercises, meet with elite units, and be briefed by Police Commissioner Roni Alsheich before concluding at the annual 9/11 memorial service outside of Jerusalem.

For the second consecutive year, the Police Unity Tour, a delegation of 52 American law-enforcement officers from 12 states, arrived in Israel to train in counterterrorism techniques and attend an annual 9/11 memorial service outside Jerusalem. 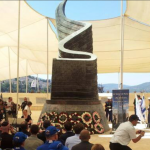 Hundreds of Americans & Israelis gather at the Israeli Memorial to remember the victims on the 15 year anniversary of attacks in New York, Washington, and Pennsylvania.

A memorial ceremony for the victims of the September 11th, 2001 attacks is being held at the Jewish National Fund 9/11 Living Memorial.

“On September 11th, 2001, Americans showed a great courage and bravery, risking and giving their lives to save people that they never met.

Controversial UK vicar Stephen Sizer under official investigation by the Church of England over his latest anti-Semitic blood libel posted on Facebook.

The Church of England has launched an investigation into charges of anti-Semitism made against one of its more controversial vicars, Dr. Stephen Sizer.

Dr. Stephen Sizer addressing the Christ at the Checkpoint conference in 2012 – Israel Today

Sizer, it would seem, has joined the ranks of what the Americans call “truthers” – those who insist that the truth has been concealed regarding who was behind the September 11, 2001 terrorist attacks in the United States.

The ad was aired several times on PA TV News during the past week according to Palestinian Media Watch (PMW), which translated it. In the ad, a split screen shows the Al Qaeda terrorists ramming a plane into the iconic New York buildings, alongside the IDF airstrike last Monday on a 12-story Gaza building used by Hamas terrorists. Continue Reading »

Anti-Semitic Fan of 9/11 to be Honored by Michelle Obama & State Dept.

First Lady Michelle Obama and the U.S. State Department this Friday honor 10 women with the Int’l Women of Courage Award – including one who tweeted her joy about Al Qaeda’s 9/11 attack on America.

Samira Ibrahim, a 25-year-old women’s rights activist, was a participant in the January 25 Revolution demonstrations in Cairo’s Tahrir Square that brought down the regime of former Egyptian President Hosni Mubarak, and eventually morphed into the region wide Arab Spring uprisings.  Continue Reading »

Israeli delegation, headed by Public Diplomacy Minister Yuli Edelstein, arrives in NY to honor the victims of the 9/11 attacks • Edelstein: Attack shows the destructive capability of terrorists aided by Iran

An Israeli delegation headed by Public Diplomacy and Diaspora Affairs Minister Yuli Edelstein arrived at Ground Zero in New York on Friday to honor victims of the Sept. 11, 2001 terrorist attack on the Twin Towers that left almost 3,000 people dead.

“The horrific attack was an example of the destructive capability of terrorist groups governed, motivated and supported by the terrorist capital of the world — Iran.