Apple, backed by a broad coalition of technology giants like Google and Facebook, was fiercely opposed to assisting the US government in unlocking the iPhone on grounds it would have wide-reaching implications on digital security and privacy.

A key court hearing scheduled earlier this month to hear arguments from both sides in the sensitive case was abruptly cancelled after the FBI said it no longer needed Apple’s help and had found an outside party to unlock the phone.

“Our decision to conclude the litigation was based solely on the fact that, with the recent assistance of a third party, we are now able to unlock that iPhone without compromising any information on the phone,” US attorney Eileen Decker said in a statement.

“We sought an order compelling Apple to help unlock the phone to fulfill a solemn commitment to the victims of the San Bernardino shooting — that we will not rest until we have fully pursued every investigative lead related to the vicious attack.”

It was unclear who helped the FBI access the phone and what was stored on the device, but news reports have said the FBI may have sought assistance from an Israeli forensics company.

In a court filing asking that the case be dismissed, federal prosecutors said the US government had “successfully accessed the data stored on (Syed) Farook’s iPhone and therefore no longer requires assistance from Apple Inc.”

Farook and his wife Tashfeen Malik killed 14 people in San Bernardino, California on December 2 before dying in a firefight with police. Two other phones linked to the pair were found destroyed after the attack.

Tech companies, security experts and civil rights advocates had vowed to fight the government, saying it would set a precedent and open the door to companies being forced to hand over customer data. 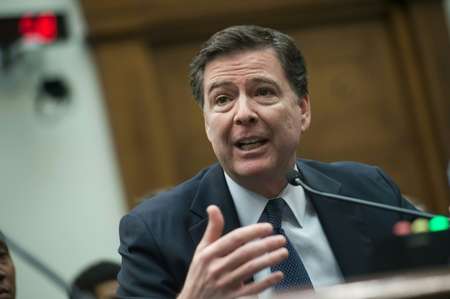 FBI director James Comey testifies before the House Judiciary Committee on the encryption of the iPhone belonging to one of the San Bernardino attackers on Capitol Hill in Washington, DC, on March 1, 2016 – Photo: Nicholas Kamm/AFP/File

The government had fired back, insisting that Apple was not above the law and that its request for technical assistance concerned only Farook’s work phone from the San Bernardino health department.

Some experts speculated that the government’s fight with Apple was more about gaining wider access to data than unlocking a single phone.

In a recent editorial, The Wall Street Journal said the Justice Department’s legal effort was “reckless” and that the FBI “fibbed by saying the Apple case is about one phone.”

FBI director James Comey said his agency only decided to back down in the court case after it found a third party that could crack the phone.

“You are simply wrong to assert that the FBI and the Justice Department lied about our ability to access the San Bernardino killer’s phone,” Comey said in an open letter.