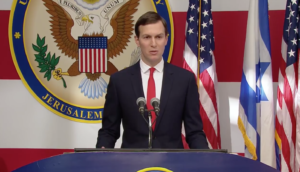 REPORT: For the first time, US President Trump’s senior adviser will reportedly provide an update on the long awaited Israel-PA peace plan during the upcoming Warsaw Middle East conference next week.

A White House official said Kushner will be participating in a discussion hosted by former Norwegian foreign minister Borge Brende on efforts to end the Israeli-Palestinian Arab conflict.

This would be the first time Kushner will speak publicly and answer questions about the long-awaited peace plan. Ravid noted that Kushner is not expected to give details about the parameters of the plan, but will most likely provide an update on its status and how the administration wants to reveal and launch it in the next few months after the April 9 elections in Israel.

Little is known thus far about the peace plan. A Channel 13 report earlier this month claimed that it would include the establishment of a Palestinian state in about 90 percent of Judea and Samaria, with at least part of eastern Jerusalem as its capital.

However, US envoy Jason Greenblatt, who is working on the plan alongside Kushner, rejected that report, saying it was inaccurate.

The Palestinian Authority (PA) has rejected the US peace plan being formulated by the Trump administration before it has even been unveiled.

The PA has been boycotting the US ever since President Donald Trump’s recognition of Jerusalem as Israel’s capital in December of 2017.

The Israel-PA peace process has been frozen since 2014, when PA chairman Mahmoud Abbas breached conditions of talks that were ongoing at the time by unilaterally joining international treaties and conventions.