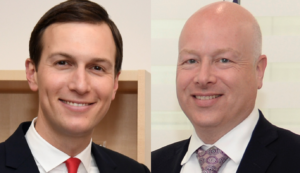 WASHINGTON -​ Since direct communication between the White House and the Palestinian Authority broke down last year following Donald Trump’s recognition of Jerusalem as Israel’s capital, the president’s Middle East peace team has tried to engage its leadership indirectly, through intermediaries and the media, hoping to move on from their impasse to discuss potential paths forward in negotiations with the Israelis.

Their initial approach was to disengage: Allow PA leaders to vent their frustrations, thought Trump’s peace team, and they will ultimately return to their longtime American friends and patrons. But as Palestinian leaders, in particular President Mahmoud Abbas and chief negotiator Saeb Erekat, continually increased the pace and pitch of their criticism over the course of six months, personalizing the feud and writing off any potential for amends, the public message became one-sided. The Palestinians were lobbing one earful after another at the peace team in the press, and the team kept on taking it.

PA’s grandmaster fabulist Saeb Erekat & PA autocrat Mahmoud Abbas, unwilling to make peace with every Israeli PM in last 25 years and uncooperative with every American President whose tried to broker a peace agreement.

​And so Trump’s aides have chosen to begin speaking out in response. Their latest efforts came in the form of an op-ed from Jason Greenblatt, Trump’s special envoy to the Middle East peace process, and an interview with Jared Kushner, the president’s son-in-law, with a Palestinian newspaper. Their goal was to push back argumentatively against some of Abbas and Erekat’s harshest rebukes, but both Greenblatt and Kushner took pages from their books, criticizing them personally.

Days later, Kushner told the Al Quds newspaper that Abbas “says that he is committed to peace and I have no reason not to believe him.” “However, I do question how much President Abbas has the ability to, or is willing to, lean into finishing a deal,” Kushner said in the rare interview. “He has his talking points which have not changed in the last 25 years. There has been no peace deal achieved in that time.”

The Palestinian response was harsh. accused Greenblatt of attempting to topple authority leadership and characterized the peace team as “the main campaigner for Israel in crushing Palestinian national and human rights.” Other officials accused Kushner of trying to circumvent talks with the PA, through direct messaging to the Palestinian people, in order to destabilize it.

But privately, Kushner and Greenblatt were surprised by the nature of their response. Rather than pushing for Abbas or Erekat’s ouster, they saw their messaging as an effort to implore Palestinian leaders to reengage– to come back to the table before they release their peace plan, a year in the making.

“When Dr. Erekat and the Palestinian Authority are finally ready to reject Hamas’ violence and lies and work with us to bring relief to Gaza, we believe real progress could be made that would lay the foundation for a more hopeful future,” Greenblatt wrote. Kushner added: “[Abbas] knows that we are open to meeting him and continuing the discussion when he is ready.”

Left wing Haaretz daily (English & Hebrew versions) is often criticized as being anti-Israel in their articles. – Photo: Hmbr at he.wikipedia

White House officials believe it was not the content of Greenblatt’s op-ed, but rather an editorial decision by Haaretz, the Israeli newspaper that ran it, which dictated Erekat’s forceful response. The original headline of Greenblatt’s submission was preserved in Al Quds, which ran the piece in Arabic: “Saeb Erekat’s Obligation to Create The Right Environment for Peace.” But Haaretz changed it. “Trump Mideast Envoy: The Palestinians Deserve So Much More Than Saeb Erekat,” the newspaper charged, adding in its subtitle that Greenblatt believes Erekat’s rhetoric will “never” achieve peace, and that “different” leaders are necessary.

A National Security Council spokesman confirmed to The Jerusalem Post that the headline of Greenblatt’s op-ed was indeed changed by Haaretz editors, and openly accused the newspaper of revealing a bias toward conflict in doing so.

“We are disappointed that Haaretz changed Jason Greenblatt’s title,” the US official said. “The goal of Special Representative Greenblatt’s op-ed was to refocus the public conversation with the Palestinian leadership back to peace.” “The title and subtitle Haaretz chose to use,” the official continued, “distorted the message and undermined the purpose of Greenblatt’s op-ed. The title has also led Erekat to argue that the Trump administration is pushing for Erekat’s ouster. The op-ed does not push for Erekat’s ouster; in fact it speaks about Erekat’s obligations in connection with any peace effort.”

In his interview with Al Quds, Kushner discussed a plan that proposes “defined” borders, massive investment into Palestinian infrastructure and a reclamation of Gaza from Hamas, a terrorist organization that has splintered the coastal strip from PA control.

Kushner also noted that his team has chosen not to “chase” the PA since it shut down communications in December. He urged local Palestinians to encourage their leaders– their existing leaders– “to support efforts to achieve peace.” “Let them know your priorities and give them the courage to keep an open mind towards achieving them,” Kushner said. “Don’t let your leadership reject a plan they haven’t even seen.”

US officials say they would strongly prefer Abbas and Erekat return to the table before they publish their peace plan. They acknowledge Palestinian engagement would markedly increase their chances of success. But they worry that this particular PA is refusing to engage precisely for this reason, for fear of success or of the contents of the plan itself.

For this reason, officials say, the peace team will release its plan whether or not the Palestinians reengage.