The Afek Oil and Gas project in the Golan Heights, involves 3 years of exploration for conventional oil using up to 10 wells. 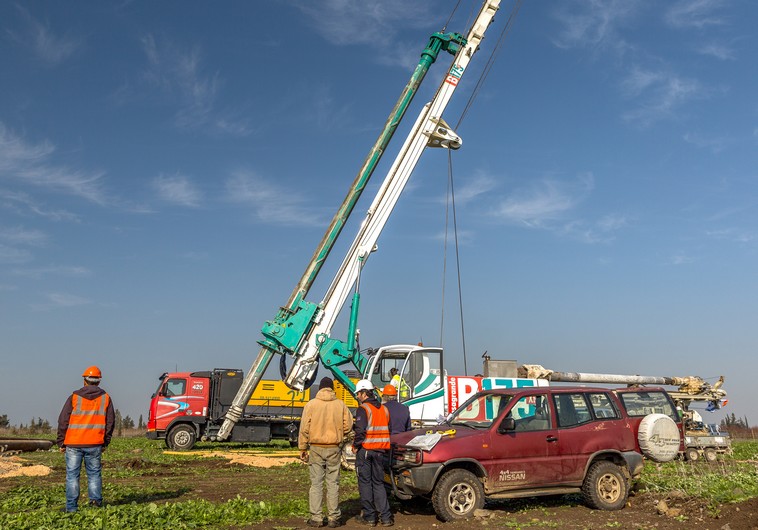 The project, which is being conducted by Afek Oil and Gas, involves three years of exploration for conventional oil using up to 10 wells. While the company has held a license for the project for the past 20 months, petitions against the activities put the plans on hold since September. But on Tuesday, the steps necessary – the “dirt works” – to prepare the first site for drilling were already underway.

“It’s the preparation of the area where we’re eventually going to put the rig to work, to drill,” Afek Oil CEO Geoffrey Rochwarger told The Jerusalem Post over the phone, on his way to the site. “We hope that within the first two weeks of February we can start the actual drilling.”

After receiving its exploratory drilling license for a 395 sq. km. plot south of Katzrin in April 2013, the project earned approval at the Northern District Committee for Planning and Building on July 24 this year.

On September 1, however, Adam Teva V’Din (Israel Union for Environmental Defense) and a group of Golan Heights residents submitted a petition to the High Court of Justice, demanding the cancellation of the exploratory drilling project. In the petition, the complainants wrote that the oil in the region is likely tight oil and would require unconventional drilling procedures like fracking – which could potentially pollute groundwater and cause underground fluctuations.

Afek Oil has maintained that the oil in the region is just as likely conventional as tight, and would not necessarily require fracking for extraction. Meanwhile, the permit issued by the Northern District Committee allows only for exploratory drilling in a gradual, site-by-site manner, forbidding any fracking or production of oil in a non-conventional form.

At the end of September, the High Court of Justice issued an order for the temporary cessation of Golan Heights drilling operations, in order to grant the state more time to respond to the petition. This order was once again extended at the end of October.

The judges determined that Afek could begin the project as planned, reiterating that the company would not be allowed to transition to commercial production prior to the approval of a plan by the National Council for Planning and Building. In addition to only drilling at one site at a time, the company will be limited in the amount of oil that can be produced during the trials – as per the original license.

“I’m certainly very pleased. I’m happy that the justices did what they were supposed to do,” Rochwarger said. “They were asked to investigate whether the committee awarded us the permit in accordance with the regulations. Although there was a lot of noise about other things not related to that, I am very pleased that the justices focused on what they were supposed to.”

Expert opinions from outside the company demonstrated that the potential dangers raised by the project’s opponents were not present, according to Rochwarger.

“I am very pleased that they came out and gave their stamp of approval on everything we’ve done,” he added.

Despite the fact that the project would continue, Adam Teva V’Din representatives identified a “significant achievement” in the wording of last Tuesday’s ruling. The organization particularly praised the requirements that drilling occur on an individual, site-by-site basis and that only limited amounts of oil be produced.

Commercial production, they explained, could only occur following approval of a new program by the country’s planning bodies.

Nonetheless, Rochwarger maintained that “everything that the justices said is exactly what the [Northern District] Committee said when they gave us a permit.” Drilling one site at a time, as well as the production limitations, were already part of this permit, and “not even one clause was changed from the original permit that was awarded,” he said.

Orly Ariav, an attorney responsible for environment and community at Adam Teva V’Din, argued that the justices did, in fact, make a noticeable clarification in their ruling. Now, the company will not simply be able to approach the National Infrastructures, Energy and Water Ministry for a modified drilling license if they seek to move to commercial production, she explained. Instead, they will have to undergo an entire new procedure of approval with the country’s planning authorities, Ariav said.

Prior to the ruling last week, Ariav stressed that she and her colleagues feared that the eventual question regarding commercial oil production “would never be answered by the planning committees in Israel.”

“We were really certain that before this decision that the company could have produced oil without having an approved zoning plan to do it,” she continued. “Now we are sure they won’t be able to do it.”

Regardless of which side achieved more in the court ruling, drilling preparations are underway and after significant delay, the project is beginning as planned. Afek Oil has chosen site number 5 out of 10 to start with, located north of Nahal El Al near Kibbutz Natur.

Drilling at the first site will require the most preparation time, as the company’s workers are assembling the rig within Israel for the first time, Rochwarger said. After beginning drilling, he said they expect to have a much better idea of the properties of the surface level as well as drill operations.

“We do expect that once we get past the first well it will be a smoother, faster process,” he said.

Once they have procured successful drilling samples, the workers will be conveying their findings to laboratories at Ben Gurion University, where researchers will examine the sub-surface material, according to Rochwarger.

“This will start to give us a picture of what might exist down there,” he added.

With that knowledge, the company can determine the next ideal well to drill.

“We’ll try to efficiently as possible prepare everything beforehand and then move on,” Rochwarger said.