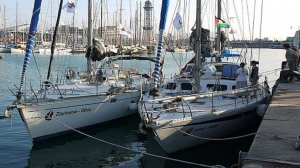 The entire flotilla of 2 small vessels, carrying a few dozen women who plan on breaching Israel’s naval blockade of Gaza, had their departure delayed by the police, and a bad engine.

The flotilla to Gaza, which was set to arrive in early October carrying 30 women from around the world on two ships, got off to a late start.

One of the ships, the Amal (Hope) was forced to turn back after facing engine trouble. The second ship, the Zaytouna (Olive), set off only late in the afternoon after being delayed for many hours by local Italian police.

The flotilla’s organizers accused Israel of causing the delays and stated that they hope the Amal will be able to return to sea after being repaired.

One of the passengers of the Flotilla, Zohar Regev, an Israeli who grew up on a kibbutz and has since relocated to Spain, spoke in an interview on the flotilla’s website. Regev discussed her expectation of Israel to use force to stop the flotilla.

“We are committed to non-violence. We will not give Israel a reason to attack us violently,” Regev stated.

She continued, “You need courageous people to set out on a flotilla like this. Silence on Israeli actions would be an outrageous injustice and shame.” 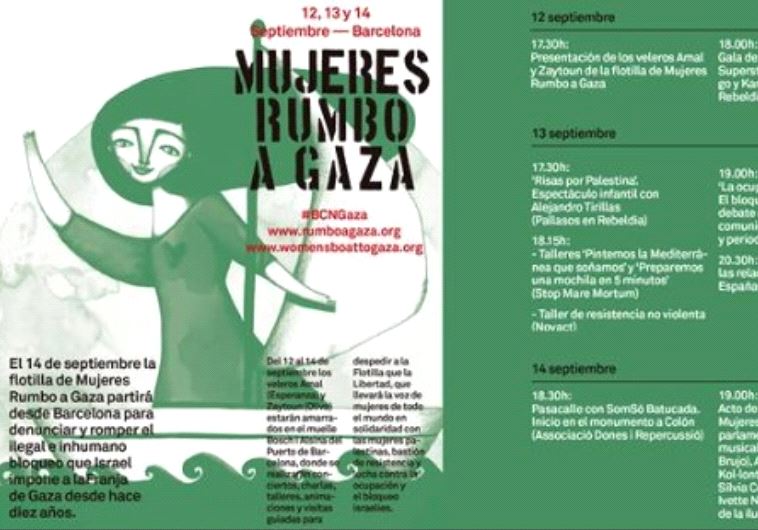 The schedule for the ‘Women’s Boat to Gaza’ flotilla – Screenshot

Mairead Maguire, a Nobel Peace Prize laureate from Northern Ireland, was also on board. Maguire’s husband was killed during the takeover of the Mavi Marmara in 2010.

In an act of support for the event, 55 members of the European Parliament appealed to the EU Minister of Foreign Affairs,  Federica Mogherini, to urge Israel to ensure “safe passage” for the two ships.

Days before the flotilla launched, a diplomatic source told The Jerusalem Post’s sister Publication Maariv that the Foreign Ministry was doing its utmost to deal with the matter. The source added that the ministry’s efforts sought to minimize possible diplomatic and media harm caused by the flotilla.

MK Oded Forer (Yisrael Beitenu) turned to Knesset Director General Albert Sakharovich, demanding measures be taken against Elini. Knesset Speaker Yuli Edelstein told him in response that they would look into her participation and the “implications of this situation on her continued activity in the Knesset.”

Likud MK Dr. Anat Berko turned to the head of Israeli Police investigations, Manny Yizhaki, asking that an investigation be opened against the flotilla’s Israeli participants for committing security offenses.

“Zohar Birawi from England and Mazen Kahil from France are members of Hamas’s European headquarters and are the flotilla organizers,” Berko explained.

“Any Israeli citizen who took part in the flotilla came into contact with a foreign agent and committed an act of solidarity with a terrorist organization,” Berko added.

In June, Israel and Turkey mended a six-year rift sparked by the Mavi Marmara incident, in which 10 Turkish citizens were killed attacking Israeli commandos.

Israel fears such flotillas could be used to transport materials to Gaza that could be used by terrorists to manufacture weapons and militant infrastructure.

Last June, the Israeli Navy intercepted a Swedish flotilla boat off the coast of Gaza without incident and towed the vessel into the Ashdod Port.

Jpost.com Staff contributed to this article.