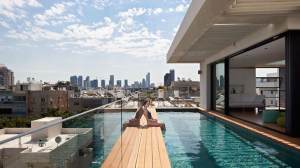 Be it in a 10-story resort building on Tel Aviv’s promenade, a villa nearly touching the walls of Jerusalem’s Old City or an apartment overlooking the Haifa Bay, here are a dozen houses across Israel that will simply take your breath away.

Ultra-modern minimalism, cozy luxury, and astounding views – these are a dozen of the most architecturally striking homes in Israel.

This house overlooks the Hula Valley, the Golan mountains and Mount Hermon, but its planning and design are far from “rural” and are unusual in their modernism compared to the other large buildings in the area.

The owners – a couple with grownup children – wanted the house to match its landscape, and it integrates into the view harmonically. In order for them to optimally enjoy the view, Architect Arnon Nir created as many open spaces as possible. 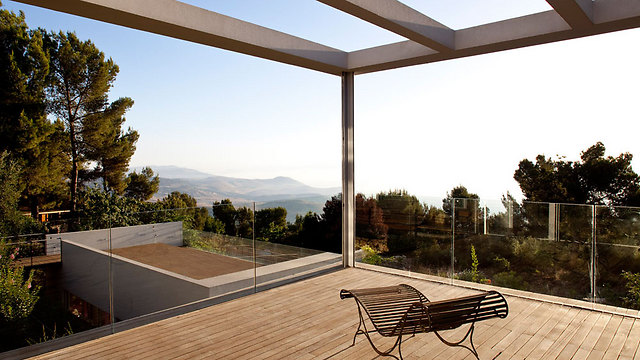 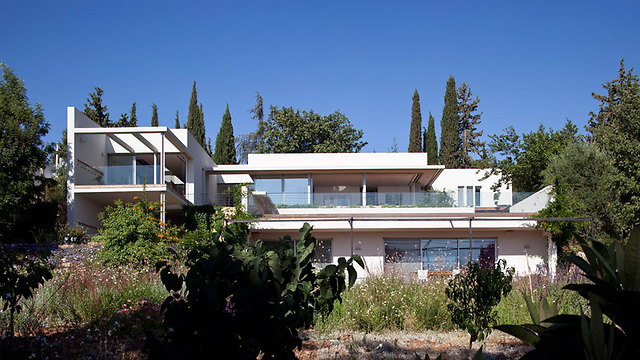 The 10-story house on 48 Herbert Samuel Street is one of the old luxury buildings on Tel Aviv’s shorelines. In 2008, it was purchased by three Jewish entrepreneurs from Europe who had originally planned to renovate the apartments and put them on sale.

Eventually, they decided to turn the building into a “town house” they could use during their visits to Israel. The 10 floors became four apartments: A triplex on the upper floors and three duplexes. The lower floor serves as a shared living room, and the pool on the roof serves all tenants as well.

The huge windows overlook a view which will make you believe that the apartment is located directly on the sea, although the promenade road separates the building from the beach. 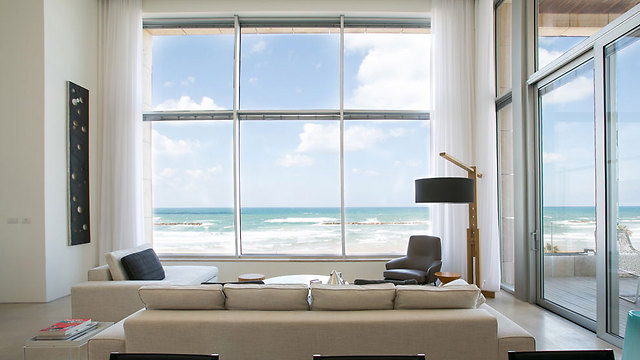 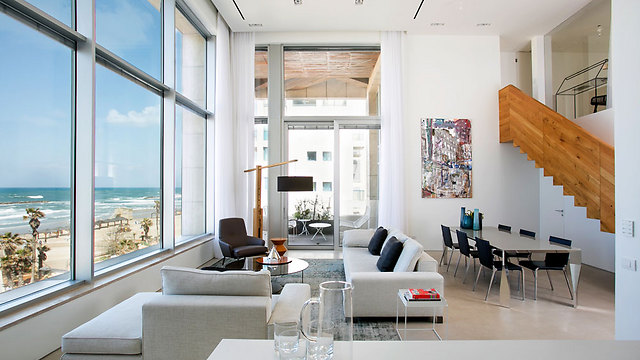 This is probably the house with the most beautiful view in Israel. Stretching over 900 square meters at the edge of Jerusalem’s Mamilla compound, it has a huge roof overlooking Jaffa Gate and a pool hiding behind the arches on the street level.

The most special place in the house appears to be the walk-in closet, where the tenants – a couple in their 60s and their two grownup sons, who divide their time between Europe and Israel – can watch an unstoppable flow of people of different religions walking to the capital’s holy sites – the Western Wall, the Church of the Holy Sepulchre or the Al-Aqsa Mosque – as less than 50 meters separate between the window and the Old City walls. 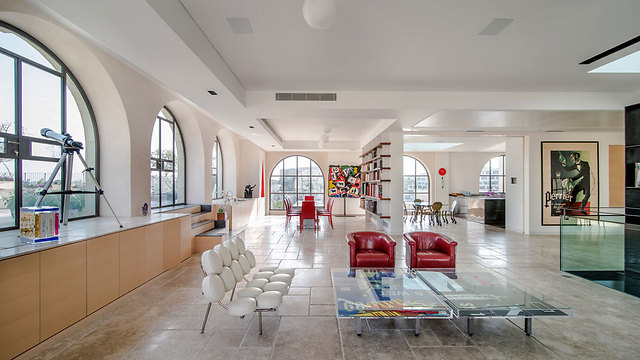 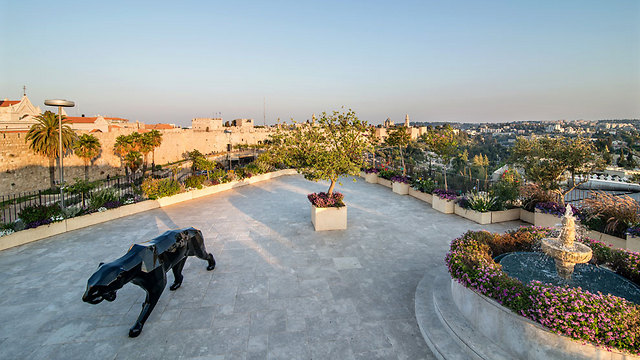 A mega villa in the city

At first sight, it looks like a regular four-story apartment building in the Old North of Tel Aviv. A closer look reveals a six-story villa measuring 650 square meters (about 7,000 square feet) in size, which houses one four-member family.

The three main floors overlook the street with large windows. The swimming pool is located on the roof, separated from the urban rooftop landscape by a transparent glass rail. 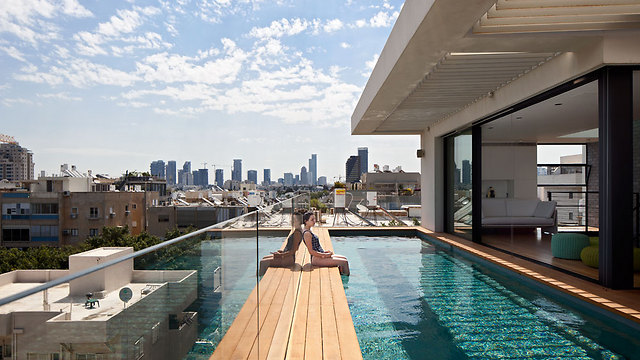 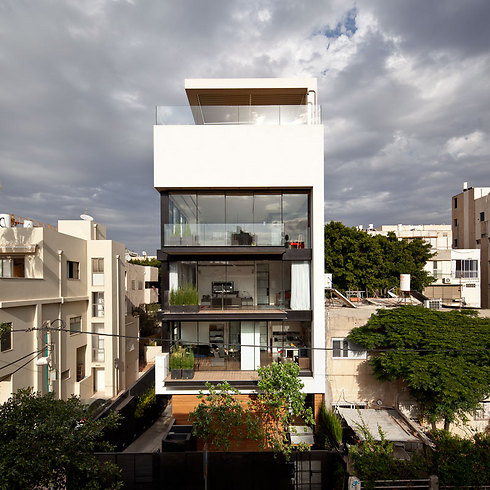 The most splendid view in a communal Galilee village

This house belongs to a full-time working couple with two small daughters, who wanted a practical home which would not require intensive maintenance. They found what they were looking for in the communal village of Mikhmanim, where they got their hands on a house with the most splendid view in the community, with large windows overlooking the Beit Hakerem Valley and Karmiel. 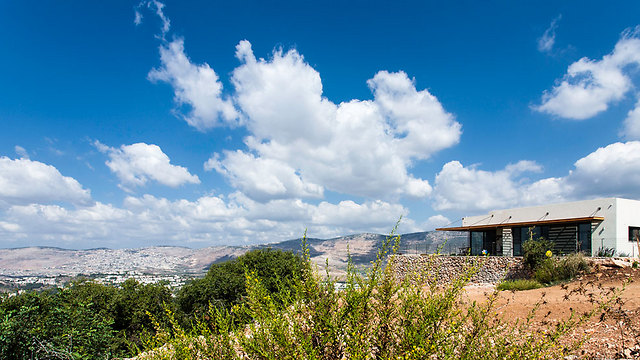 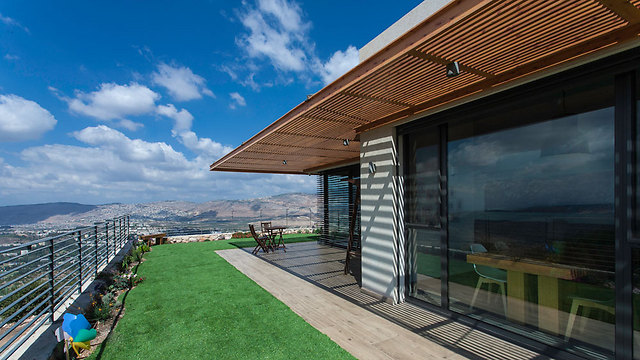 Clothes and shoe designer Irit Blinder’s original plan was to purchase a small apartment. After searching for two years, she found “a place with character” and decided to invest in it. It took a long time and cost a lot of money, but the result – a three-story apartment on Jaffa’s Yefet Street – combines the old and the modern while respecting the past.

In order to deal with the high expenses of her apartment, she often rents out the second floor to flatmates, with whom she shares the living room and kitchen. 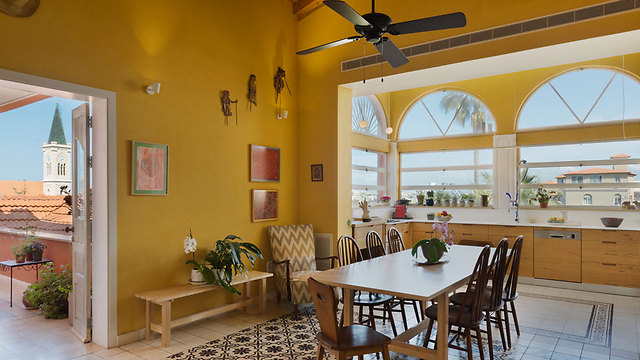 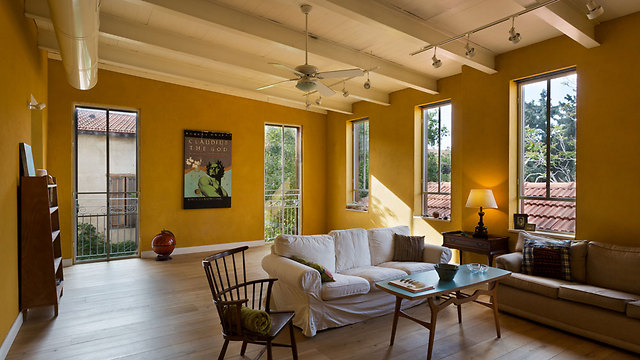 Living in a poster of the good old Land of Israel

This two-story house in Moshav Hayogev in the Jezreel Valley features huge windows overlooking the fields, a dining room leading to a garden, halls securing privacy in the bedrooms and eclectic, convenient furniture.

It belongs to a couple who returned to the cooperative settlement with their two small children after years of living in central Israel. Simple and beautiful, the house integrates very well with its surroundings. 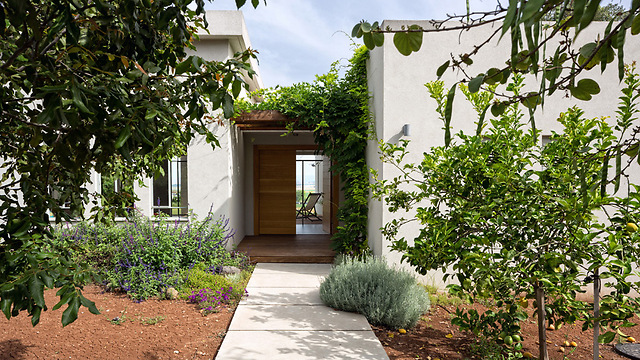 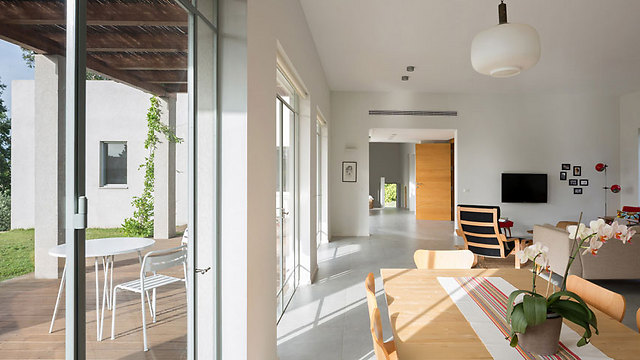 Shortly before turning 40, with two toddlers, this couple decided to move back to northern Israel after living for more than a decade in a small apartment in central Tel Aviv. They purchased a 500-square-meter (5,380-square-foot) plot in Kibbutz Ein Dor and built a two-story villa planned by Architect Yair Herman.

The big bonus they received is the amazing view of Mount Tabor which can be seen from their living room windows. 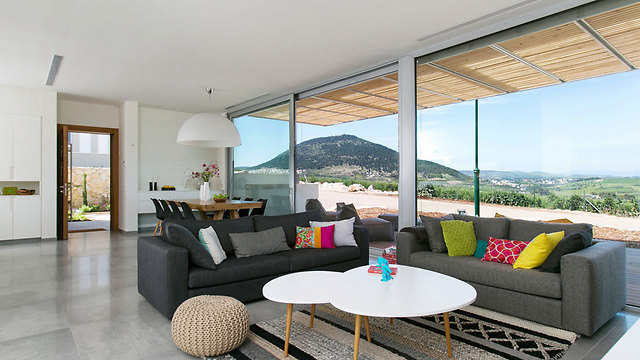 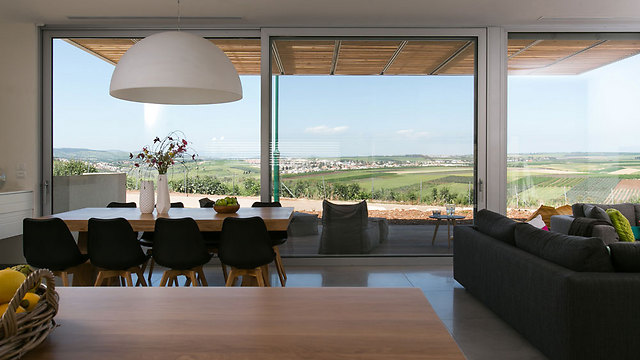 Front row tickets to the best show in town

The tall buildings surrounding Tel Aviv’s famous Rabin Square were never considered attractive from the outside, but Architect Ilan Halachmi fell in love with the urban view of the square and Tel Aviv Municipality building and bought an apartment on the fifth floor overlooking “Israel’s main performance stage”.

“A new show is presented every day, and I have front row tickets from my living room sofa,” he says. Halachmi lives in the apartment, which was completely renovated, with his wife the lawyer and their 18-month-old son. 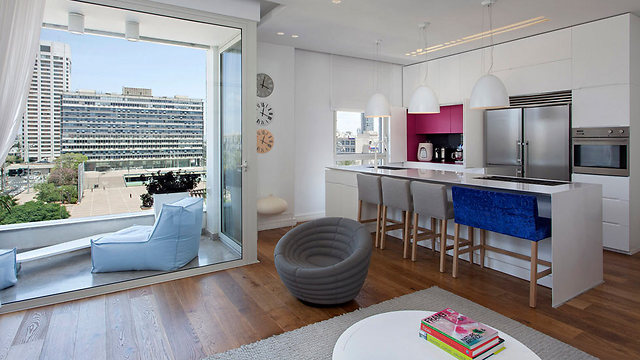 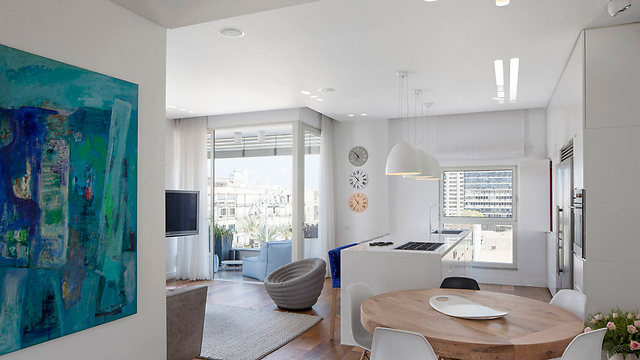 Inviting the Haifa Bay into your house

This duplex apartment is located on the fourth and fifth floors of a building which was built on a Mount Carmel slope about 16 years ago. It measures 340 square meters (3,660 square feet) in size and was bought by a couple in their 50s with three children. When two of the grownup children left home, the parents decided to move from their private home in Haifa to an apartment on the street with the most beautiful view in the city.

“When I first entered the apartment, I was amazed by the view of the bay it overlooks,” says Architect Rona Levin. “I realized that we must bring the bay into the house and that it would be impossible to plan the apartment without integrating the surroundings into it.”

A spiral staircase located at the entrance was moved to the side of the living room, making space for air and light, which entered the flat together with the sea. 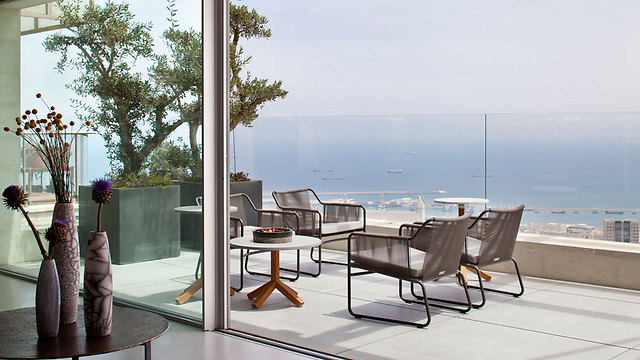 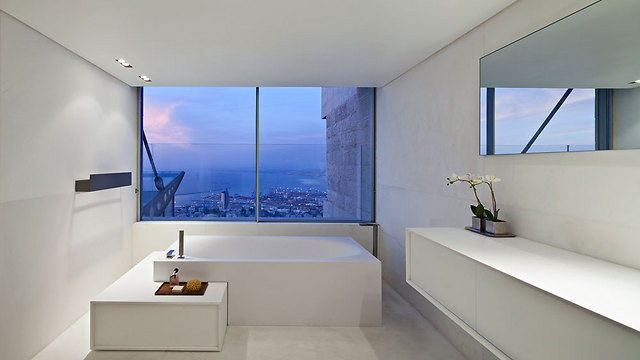 The New Central Bus Station, crumbling houses, asylum seekers, a car parts garage, dustbins and a piece of the sea peeking from between the skyscrapers along Tel Aviv’s shoreline – this is the view from Ofer Shahak’s penthouse in a new apartment building in Neve Sha’anan, the neighborhood with the worst reputation in Tel Aviv.

The colorful apartment with the unusual landscape measures 100 square meters (1,076 square feet) in size and is surrounded by balconies on three sides: One can go out of the living room, walk around the apartment and enter through the bedroom. 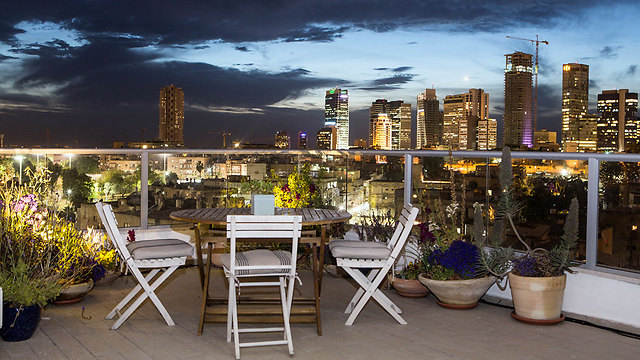 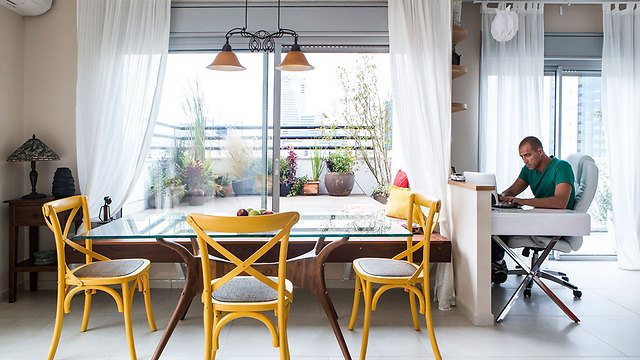 The walls of Architect Mordechai Ben Horin’s holiday apartment hide the evolving story of Jerusalem’s Jewish Quarter over 2,000 years, although the house itself is “only” 500 years old.

The small 70-square-meter (753-square-feet) apartment has seen so many people and events over the years: From Titus’ command post through an important family of Jews expelled from Spain, a murder in the 1938 riots and a female terrorist who planned to blow up a cinema to a couple who still lives here during the weekends.

The house hardly has any windows, yet the flow between its different parts integrates into the Old City alleys. The design created by the couple, which bought the property in 1980, reinforces the apartment’s connection to the Arab atmosphere surrounding the house. The roof has a magnificent view of the Judea Mountains, and one can nearly touch the Western Wall plaza, the Dome of the Rock and the Church of the Holy Sepulchre. 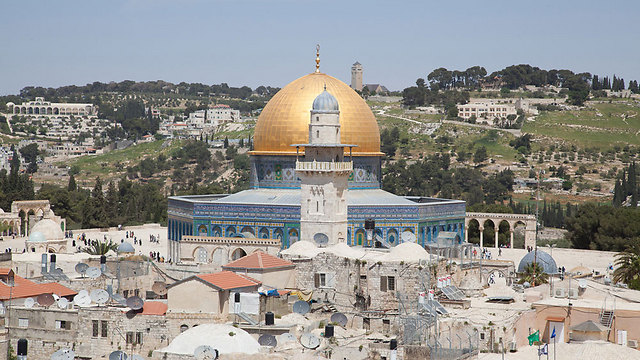 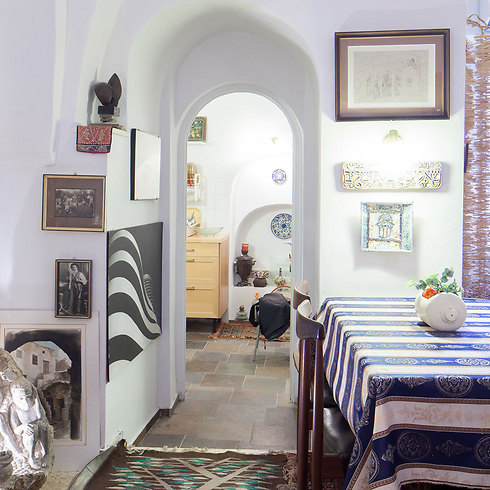