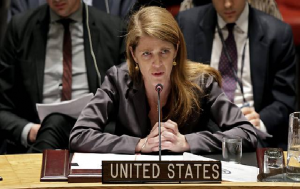 That move would be just one element of a plan to receive the peace process, according to the Journal.

The newspaper added that other elements might be a presidential speech and joint statement from the Quartet.

The report offered one possible scenario: “the US would push Israel to halt construction of settlements in the Palestinian territories and recognize East Jerusalem as the capital of a Palestinian state… Palestinians would in turn be asked to recognize Israel as a Jewish state and end claims on a right of return for Palestinian refugees.” That scenario would entail establishing two states based on the 1949 armistice lines, with land swaps to reflect population changes since then.

According to the report, Palestinian officials said they were open to an intervention by Obama.

Obama and Netanyahu have frequently butted heads. In March 2015, Netanyahu invoked the president’s ire with his pre-election statement that a Palestinian state would not be created under his government, seen by the White House as a repudiation of the two-state solution that consistently been at the heart of all negotiations involving the US. Although Netanyahu backtracked from this statement the day after the election, Obama told the press that he had told the Israeli leader that “it is going to be hard to find a path where people are seriously believing negotiations were possible.”

Prime Minister Benjamin Netanyahu has declined an offer to meet US President Barack Obama at the White House later this month and canceled his trip to Washington, the White House said on Monday.

Netanyahu decides against Washington trip
Meanwhile, Netanyahu’s decision to nix his US visit marked the latest episode in a fraught relationship with Obama that has yet to recover from their deep differences over last year’s US-led international nuclear deal with Iran, Israel’s arch foe. The White House said the Israeli government had requested a Netanyahu meeting with Obama on either March 18 or 19 and that two weeks ago he was offered a March 18 encounter.

“We were looking forward to hosting the bilateral meeting, and we were surprised to first learn via media reports that the prime minister, rather than accept our invitation, opted to cancel his visit,” White House spokesman Ned Price said in an emailed statement. “Reports that we were not able to accommodate the prime minister’s schedule are false,” he said.

Netanyahu said on Tuesday that he had declined the offer because of the heated US election campaign. The Prime Minister’s Office said that Israel’s ambassador to the US informed the White House last week there was a “good chance” Netanyahu would not make the trip.

Netanyahu also saw little to show for such a trip, given that the new defense Memorandum of Understanding is “far from being agreed yet,” according to Channel 10. Several Israeli media quoted Israeli officials as saying that no appropriate time could be found for the meeting before Obama’s departure for Cuba.

Netanyahu had been expected to visit Washington this month not only to see Obama but to address the annual conference of the leading U.S. pro-Israel lobby, AIPAC. In the past he has sometimes spoken to the group via satellite.

The prime minister made a speech to the US Congress last March criticizing the then-emerging Iran nuclear deal and was denied a meeting with Obama during that visit in what was widely regarded as a diplomatic snub.

But the two leaders met at the White House in November and sought to mend ties. In recent months, differences over defense aid have underscored continuing tensions over the Iran deal.

Netanyahu and his aides suggested in February if Israel were unable to reach an accord with Obama, it could wait for the next president to secure better terms. Current US defense aid to Israel, worth about $3 billion annually, expires in 2018. The two sides are seeking an extension before Obama leaves office in January 2017.

US Vice President Joe Biden, on a five-day trip to the Middle East, is due to visit Israel later this week and hold talks with Netanyahu.