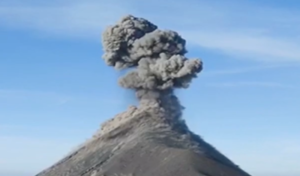 The National Coordinator for Disaster Reduction in Guatemala said that fiery clouds of smoke were billowing from the volcano and that soot blanketed cars and houses in the nearby villages of San Pedro Yepocapa and Sangre de Cristo.

Thousands of people were evacuated immediately following the eruption, which experts say could impact more than 1.7 million people.

According to the PMO report, Israel is readying a specialist medical team for immediate departure to Guatemala.

On Monday, Israel sent $10,000 in emergency aid to Guatemala for the purchase of medicine and other basic supplies for survivors of the eruption.

Israel’s Foreign Ministry said Monday it would consult with the Guatemalan government regarding other possible steps Israel may take to aid victims of the disaster.

Our ambassador in Guatemala Matti Cohen and the emergency assistance to the victims of the #guatemalavolcano . Israel stands in solidarity with Guatemala and will help as much as necessary 🇬🇹 🇮🇱!!! @IsraelMFA @MASHAVisrael pic.twitter.com/jbkkyZFd7J

“We follow with worry the eruption of the Fuego volcano in #Guatemala,” tweeted Foreign Ministry spokesman Emmanuel Nahshon. “Our hearts go to the victims and their families. From Israel we extend solidarity and friendship.”

“Following the volcanic eruption in Guatemala, the Foreign Ministry has sent $10,000 in immediate emergency aid for the purchase of emergency equipment (medicine, food, and blankets) for those affected. We will undertake an evaluation soon with Guatemalan authorities.”

Guatemala, a nation of some 17 million people, maintains close ties with Israel, in part due to Guatemala’s growing Evangelical population.

Last month, Guatemala became the second country to relocate its embassy in Israel from Tel Aviv to Jerusalem.