Over 20 participants were taken to hospital suffering from heat stroke. 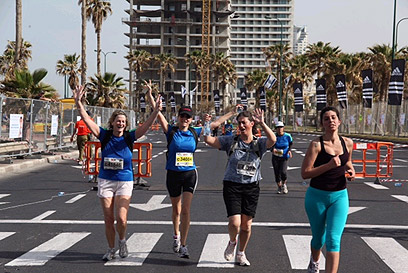 According to Magen David Adom medics, the injured are currently unconscious and undergoing artificial respiration, a few even requiring CPR.

The first aid tent at the starting point has become a field hospital with more and more runners arriving at the scene on stretchers due to suspected dehydration. MDA and Sourasky medical personnel have treated over 50 people, 20 of whom were evacuated to surrounding hospitals for further medical treatment.

Maximum temperatures in Tel Aviv are set to reach 36C degrees. The heavy heat led organizers to postpone the full marathon heat but the shorter heats were moved forward to earlier start times.

Magen David Adom Spokesman Zachy Heller told media outlets that medical teams were treating runners who fainted as early as 8:00 am, and five runners were in serious condition with one runner in critical condition.

“They are all young people in their 30s who are suffering from heat strokes,” he said. The five need resuscitation and one runner required CPR. “The injured were all transferred to , Wolfson and Sourasky Medical Centers.”

Heller added that the medical teams prepare for these situations every year but “this year the cases are especially severe. From the early hours of the morning we’ve treated over 50 people along the marathon courses, they’re all suffering from dehydration, heat stroke and fainting fits.”

Commenting on the tragedy, Tel Aviv Mayor Ron Huldai told Ynet “the event is sad and troubling. The municipality did an outstanding job in preparing the race for the runners participating. Everything was done in coordination with the Health Ministry and the preparation was excellent.

“Things must be investigated to a tee, however, there has yet to be a marathon without injuries,” Huldai said.

Huldai addressed the fact that the full marathon heat was postponed while the shorter heats, including the 22K and the 10K runs were set to go ahead as usual in spite of the expected heat wave and said: “I don’t think the event should have been cancelled. I don’t know exactly what’s happening right now. 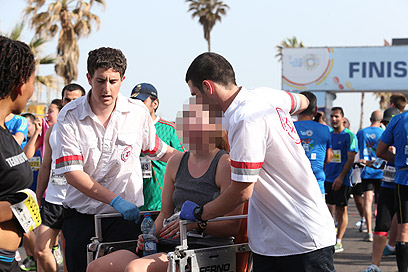 “We moved the main marathon. Cancelling meant cancelling everything and then we could not have held the marathon at all. Barack Obama is here next week.”

Ynet has learned that Health Ministry officials recommended that the Tel Aviv Municipality postpone the race in light of the heavy heat, however, in internal discussions the municipality choose to disregard the recommendation and conduct the race.

In response to the tragedy, the Health Ministry director general has instructed the ministry to form a professional committee of inquiry in cooperation with the Sport Ministry “to formulate criteria for holding such events in regards to weather conditions, which will be mandatory protocol for organizers.” 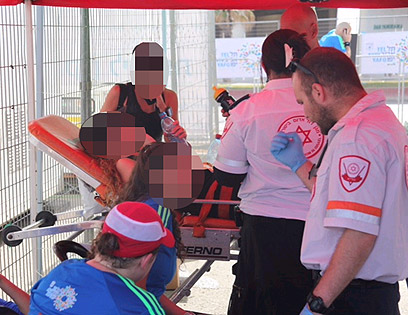 Professor Pinny Halpern, Chair of Emergency Medicine at the Sourasky Medical Center who treated the injured at the MDA “field hospital” told Ynet: This (tragedy) was a given, we knew it would be hot which is why we held discussions with the Tel Aviv municipality and the Health Ministry and consulted with physiologists and medical experts.

The final decision was to postpone the full marathon and have the shorter heats start earlier (in the morning).”

Halpern noted that “We were all concerned, but on the other hand the conditions weren’t supposed to be this hard on the short heat runners. I think that a combination of the heat surging at 7 am and the lack of wind and increase in humidity created harsher conditions.”

Tel Aviv’s major streets and traffic routes were closed late Thursday night for the marathon which attracts tens of thousands of runners every year.