A number of rockets targeted the South Sunday morning after a several-hour reprieve from rocket fire overnight Saturday as the IDF targeted dozens of sites in the Gaza Strip. One rocket struck a building in Ashkelon Sunday morning, lightly injuring one person and causing serious damage to the building. 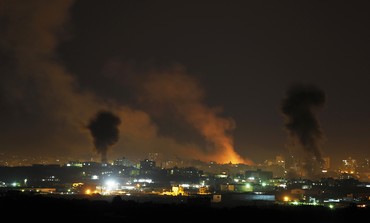 At least two other rockets hit Asheklon Sunday morning. Iron Dome intercepted one and the other fell into an open field.

Israel bombed terror targets in Gaza for a fifth straight day early on Sunday morning, launching aerial and naval attacks as the IDF prepared for a possible ground invasion, though Egypt saw “some indications” of a truce ahead.

The Israeli Navy bombarded targets from the sea and an air raid targeted a building in Gaza City housing the offices of local Arab media, wounding three journalists from al Quds television, a station Israel sees as pro-Hamas, witnesses said.

Two other predawn attacks on houses in the Jebalya refugee camp killed two and wounded 12 other people, medical officials said. According to the Bethlehem-based Ma’an News Agency, the IAF also struck several targets connected to the Popular Resistance Committees and Hamas’s military wing.

Israel unleashed its massive air campaign on Wednesday, killing Hamas military chief Ahmed Jabari with the declared goal of deterring gunmen in the coastal enclave from launching rockets that have plagued its southern communities for years.

The Jewish state has since launched more than 1,000 air strikes on the coastal Palestinian territory, targeting weaponry and flattening terrorists’ homes and headquarters.

Prime Minister Binyamin Netanyahu assured US President Barack Obama on Friday that he does not plan to launch a ground operation in the Gaza Strip – unless Hamas escalates its rocket war, The Daily Beast reported Saturday, citing two US officials briefed on the call.

“The Israeli leadership at this point is leaning against a ground invasion. No one wants that. If Hamas ratchets up the pressure, however, they may elect to do so,” a senior US official told The Daily Beast.

A US intelligence official described the conversations between the two leaders on Gaza as markedly different than their discourse on Iran, in which Netanyahu has refused to give assurances that Israel would not unilaterally attack the Islamic Republic, according to the report.

After Saturday saw dozens of rockets fired into Israel from the Gaza Strip, including two missiles directed toward Tel Aviv, a sole rocket landed in Israeli territory overnight Saturday, just after midnight. The rocket landed in the Sha’ar Hanegev Regional Council area, failing to cause injuries or damage.

Israel said it would keep schools in the South shut on Sunday as a precaution to avoid casualties from rocket strikes.

On Saturday, Egyptian President Mohamed Morsi said in Cairo that “there are some indications that there is a possibility of a cease-fire soon, but we do not yet have firm guarantees.”

Egypt has mediated previous cease-fire deals between Israel and Hamas, the latest of which unraveled with recent violence.

A Palestinian official told Reuters the truce discussions would continue in Cairo on Sunday, saying “there is hope,” but it was too early to say whether the efforts would succeed.

In Jerusalem, an Israeli official declined to comment on the negotiations. Military commanders said Israel was prepared to fight on to achieve a goal of halting rocket fire from Gaza.