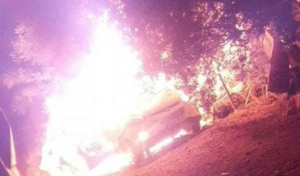 The IDF bombed a vehicle belonging to one of the commanders of Hamas’ military wing in the Neuseirat refugee camp in the central Gaza Strip on Tuesday night. Shortly afterwards, 13 rockets were fired at Gaza border communities.

At least three of the rockets were intercepted by the Iron Dome air defense system. There were no reports of injuries.

The IDF confirmed in a statement issued early Wednesday that the army attacked “a vehicle belonging to a Hamas operative in a cell launching explosive and incendiary balloons” with an aircraft and a tank.

The IDF said it also struck two of the organization’s observation posts in the northern Gaza Strip. “At the same time,” the IDF Spokesperson’s Unit said in its statement, “the Hamas terror organization led a high-trajectory fire attack on the State of Israel. Hamas will pay for the terror and instability.”

The first Code Red siren sounded at 1:40 am at a kibbutz in the Sha’ar Hanegev Regional Council. The IDF Spokesperson Unit said one rocket had been fired. Residents reported hearing an explosion.

Throughout the night, sirens sounded in other communities in the Sha’ar Hanegev, Hof Ashkelon, Eshkol and Sdot Negev regional council. At 4:01 am, a siren sounded in the city of Sderot as well.

The IDF Spokesperson’s Unit said a total of 12 rockets and mortar shells had been fired into Israel.

A Palestinian source told Ynet that the attacked vehicle was completely destroyed, but that there were no injuries in the strike and that the driver escaped unharmed. The strike took place in the western side of the Nuseirat refugee camp. Hamas closed off the area and stopped people from approaching it.

At first, the IDF refused to confirm that Israel was behind the strike, saying: “We won’t address foreign reports.” Hamas, however, rushed to announce that “a bombing will be met with a bombing.”

In another statement issued later on, Hamas said: “The Israeli escalation and the attacks on protestors and on military operatives led to a quick response from the resistance, as part of its complete readiness to carry out its mission to defend the Palestinian people.”

An incendiary balloon dispatched from the Gaza Strip was found Tuesday evening in Kibbutz Dorot in the Sha’ar Hanegev Regional Council. There were no injuries. Earlier, an IAF aircraft attacked a vehicle used by a cell of incendiary balloon launchers in the northern strip.

The tensions around Gaza have increased in recent weeks, as Gazans keep sending incendiary balloons and kites into Israel, causing more and more fires. The IDF has fired warning shots near the cells responsible for the kites and balloons and has even bombed Hamas targets, usually without causing any injuries. The terror organization, for its part, has stepped up its responses to the strikes and created the equation that “a bombing will be met with a bombing.”