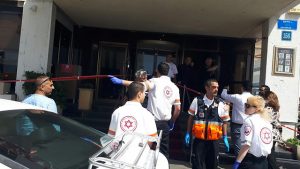 Two members of the squad were lightly injured in the attack.

MDA and United Hatzalah emergency first responders were called to the scene and treated the injured soldiers. After receiving first aid, the two soldiers were evacuated to Shaarei Tzedek Hospital in Jerusalem.

The terrorist was shot and killed during the attack.

“Together with other EMS teams in the field United Hatzalah volunteers treated two people in their early 20s who were lightly injured during the incident after the attacker had been neutralized by security forces,” said United Hatzalah spokesman Raphael Poch.

MDA paramedic Zachi Yahav described the scene of the attack: “When I got there, I saw two young men, about 20 years old, fully conscious, walking around, suffering from contusions to their lower limbs and faces after being struck by the car.”