In 2nd attack of the day, a Palestinian terrorist fails to wound Israelis but is shot dead mere hours after earlier stabbing attack that wounded 2 Border Policemen in Jerusalem, before that terrorist was also killed.

A Palestinian terrorist attempted to run Israeli reserves soldiers over with his car on Friday in Silwad, not far from Ramallah. 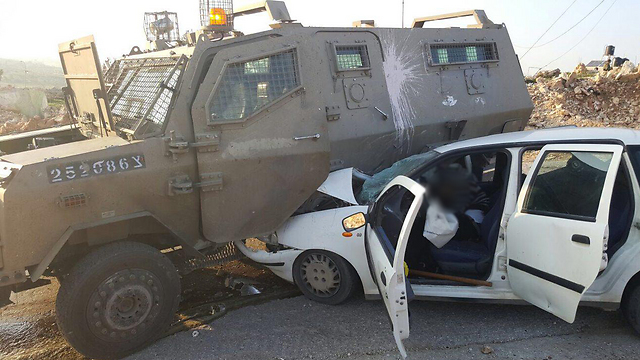 Scene of the attempted attack in Silwad

A woman was lightly wounded, apparently by shrapnel, but no one was struck by the terrorist’s car.

The attacker was shot and succumbed to his wounds after receiving emergency medical assistance.The attempt occurred during rioting near the entrance to Silwad.

It was the second terror incident of the day, after two Border Policemen and a Palestinian woman were wounded in an attack at the Damascus Gate in Jerusalem’s Old City on Friday morning.

The attacker went through the gate, then backtracked with a knife in hand and assaulted the officers from behind. He stabbed one in the head, lightly wounding him. The other officer fought him off and was wounded in his hand.

The Border Policemen then shot and killed the stabber, who was identified as Mohammed Abu Khalaf, 20, from Kafr ‘Aqab in northern Jerusalem north of the Green Line