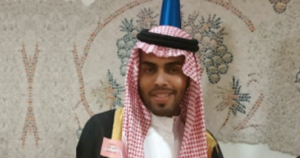 The blogger, who is part of an unprecedented six-person media delegation from the Arab world, was cursed, spat at, jeered and told to “go to a synagogue” [seen in above video] on Monday as he went to the Temple Mount.

One video clip showed Saud walking on the Temple Mount as people shouted epithets at him such as “traitor,” “animal” and “normalizer,” and small boys approached and spat in his face. Another video clip showed plastic chairs and sticks being thrown at him as he walked in the market in the Old City.

#Saudi blogger that wants to promote #peace between the Arab, Muslim world and #Israel visited the Jewish nation for the 1st time. Sadly while visiting the Temple Mount in #Jerusalem, he was attacked by a group of #Palestinians, calling him a traitor. pic.twitter.com/BHZ3OuQ8R6

Saud is the only member of the six-person delegation who was willing to go public, having agreed to be photographed in the Knesset with Foreign Affairs and Defense Committee chairman Avi Dichter.

The Saudi journalist and the rest of the Arab delegation met with Prime Minister Benjamin Netanyahu on Tuesday.

Netanyahu said he told them there is an irreplaceable alliance between Israel and the United States, “but within the region, Israel is the irreplaceable power, because there is no other power in the region that without its presence and activity here, I would say the region would collapse.”