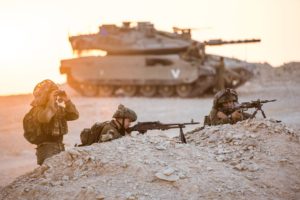 Israeli tanks began targeting at least 7 Hamas outposts along the volatile border, the IDF said, after the terrorists began shooting from the southern Gaza Strip.

The incident occurred in the Kissufim area where IDF soldier Staff Sgt. Aviv Levi was killed by a Hamas sniper on Friday afternoon on the Gaza border.

The sniper fire led to a retaliatory strike by the IDF that killed at least three Hamas terrorists.

The IDF attacked some 60 terror targets across the Gaza Strip with both tank and aircraft fire. So far, 15 targets were bombed at the Hamas Zaytun battalion headquarters. The headquarters were destroyed, while arms depots, training facilities, observation posts, the battalion situation room, the battalion commander’s office and other infrastructures were hit.

The three Palestinians killed were from Hamas’s military wing, the Izz ad-Din al-Qassam Brigade, while at least 120 Palestinians were reported wounded in the IDF’s retaliation.

Earlier on Wednesday, a rocket alert siren was sounded in the southern Golan Heights, with the IDF originally concluding that the siren had been triggered by internal fighting in the Syrian civil war, and later confirming that errant rocket fire had in fact landed in Israeli territory.

The incident came a day after the IDF shot down a Syrian fighter jet that entered Israeli airspace from the northern border.

The IDF began investigating suspicions that the rocket may have landed in the Kinneret, Israel’s northern water jewel.

Lieberman warned Friday morning that the Hamas terror group is leaving Israel with no choice but to launch a “wide scale and painful military campaign,” as incendiary kites and balloons continue to fall from Gaza on Israeli border communities.