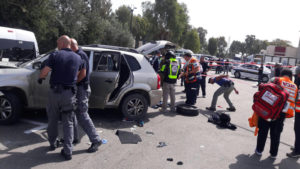 The driver hit the first victim outside the Acre city market, before continuing driving towards the city’s train station where he hit the other two victims.

CCTV footage of one of the incidents shows a vehicle travelling at moderate speed slamming into a soldier who is crossing the road as it turns into a parking lot.

Israeli medics and police work at the scene of a suspected car-ramming attack in the northern city of Acre, March 4, 2018 – Photo: United Hatzalah

This is an ongoing news story.

The soldiers injured were miraculously left in light-moderate condition after Arab-Israeli driver plowed his car (pictured above) into them near Acre’s train station and the city’s market.

Police were originally unsure whether it was a terror attack, or an angry driver who was issued a parking ticket.