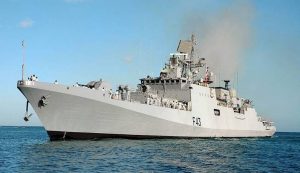 As part of the agreement, IAI supplied the LRSAM missile, the marine version of the Barak 8 air defense system, to be installed on four Indian Navy vessels.

“This is an historical day for India, in which our navy becomes the proud owners of one of the most sophisticated systems in the world,” said Mr. Arun Jaitley, India’s Minister of Defense, at a ceremony marking the delivery. “This system will help the Indian Navy protect our country.”

“It is another exciting step in the many-years collaboration between IAI, India’s government, India’s DRDO and other partners and one that reflects a technological and engineering effort of the highest level,” Levi said.

In September 2016, India announced that it had carried out a successful test of the Barak 8, which was a joint project between the two countries.

The missile system is designed to defend against a variety of short-to-long-range airborne threats, including fixed-wing aircraft, helicopters, drones and projectiles. IAI says it is able to simultaneously engage multiple targets day and night and in all weather conditions.

At the start of May, three Indian Navy ships docked at the northern Israel port of Haifa for three days as part of a deployment to the Mediterranean and West Coast of Africa.

Indian Prime Minister Narendra Modi made the first ever trip of its kind by an Indian premier to Israel last month, marking a turning point in relations between Israel and India.