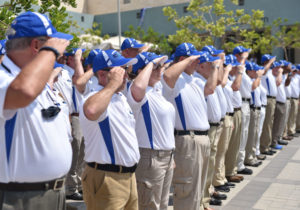 During the US delegation’s stay based at the Beit Shemesh police academy, they will participate in multiple counterterrorism training exercises, meet with elite units, and be briefed by Police Commissioner Roni Alsheich before concluding at the annual 9/11 memorial service outside of Jerusalem.

For the second consecutive year, the Police Unity Tour, a delegation of 52 American law-enforcement officers from 12 states, arrived in Israel to train in counterterrorism techniques and attend an annual 9/11 memorial service outside Jerusalem.

According to the delegation’s leader, Michael Safris, chief of the Essex County’s Sheriff’s Office Deputy Division, the Police Unity Tour was established in 1997 to honor officers killed in the line of duty.

“We are here to honor fallen police officers from the US and Israel,” he said on Monday.

“The motto of the Police Unity Tour is ‘We ride for those who died,’ and last year when we came here we did a one-day bike tour with Israeli officers, and in May we had 12 Israeli officers ride with us from New Jersey to our police memorial in Washington, DC, to participate in a candle-lighting vigil for fallen US officers,” Safris said.

During their stay, the US delegation will be based at the Beit Shemesh police academy, where they will participate in multiple counterterrorism training exercises, meet with elite units, and be briefed by Police Commissioner Roni Alsheich.

The delegation will conclude following a September 11 memorial service held at the 9/11 Living Memorial Plaza in the Arazim Valley.

MK Michel Oren, former Israeli Ambassador to the US at the 2016, 9/11 Memorial in Israel. – Photo: Gail Hopke/IsraelandStuff

Safris, 72, who is Jewish and has hosted Israeli police delegations in the US for the past 10 years, said he has visited Israel 40 times.

“From all my trips, I know the delegation forms an important relationship, and if something happens in the US or something happens here, we stay in touch and honor each country’s fallen officers,” he said. “The relationship and comradery developed over the last two years is one of the reasons we keep coming.”

In terms of heightened antisemitism in the US – recently manifested by violent white supremacists who chanted “Jew will not replace us!” while marching in Charlottesville, Virginia – Safris said the country is indeed becoming alarmingly polarized.

“There is definitely a big divide, and I think people feel more emboldened by some of the things that President Trump said, or didn’t say,” he said. “There is a definite uptick [in antisemitism].”

Asked if security for Jewish people and organizations has been heightened in the US, Safris responded “100 percent.”

“Jewish communities have hired security directors and people now have to sign in at synagogues and community centers,” he said. “It’s a lot different than it was over the last year.”

Safris said what distinguishes the Israeli police internationally is their commitment not only to law enforcement, but to Israel’s existential struggle.

“In our communities, for a lot of police officers, it’s a job, and I think that it’s more than a job for a lot of the officers in Israel because they are protecting their homeland,” he said.

“We have a lot of discussions about this when we are here,” Safris said. “It’s not just about keeping Israel going, but keeping it strong. You know, you can’t put down your weapons; you gotta be strong and act quickly, otherwise it’s going to be a lot worse.”

“They are protecting a way of life here,” he added.

Police spokesman Micky Rosenfeld, who met with the American delegation, said Israel’s ongoing security threats and the police’s efficient handling of them makes it an ideal arena for officers from across the globe to train.

“In terms of counterterrorism tactics that have been used and implemented at numerous scenes across the country, where unfortunately terrorist attacks have taken place, the Israeli police have used those tactics to minimize injuries, as well as find rapid solutions,” he said.

“Over the next few days, the Police Unity Tour will learn and see a number of these tactics across the country,” Rosenfeld added.