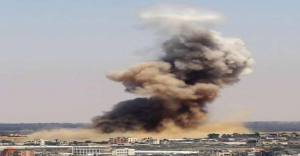 IDF is checking the possibility that one of the two powerful bombs that detonated within a minute of each other near IDF soldiers this morning was actually an RPG or anti-tank rocket.

The IDF Spokesperson’s Office provided additional details about the security incident that took place this morning, Thursday, along the Gaza Strip border.

The details revealed so far indicated that two powerful bombs were detonated within a minute of each other as an armored force passed this morning near Nahal Oz .

It is possible that an RPG rocket was also fired at the force. “The bombs were operated from a distance,” said IDF Spokesman Ronen Manelis. In response, the IDF attacked from the ground and from the air six Hamas positions.

The military notes that Hamas’ use along the fence of demonstrations, under the cover of which the bombs may have been concealed, is severe, and makes it clear that the IDF will not allow these events to take place in the future.

It should be noted that there were no casualties in this morning’s incident, and that the IDF Spokesperson’s Unit stated that the forces responded by firing with a tank at Hamas positions.

The scene of the incident is very close to the point where hundreds of Palestinian Arabs demonstrate every weekend along the fence, between the Gaza neighborhood of Saja’iya and Kibbutz Nahal Oz.