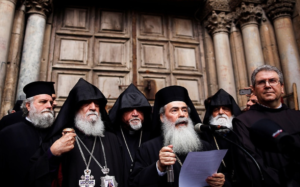 In a letter to Netanyahu seen by AFP, heads of the Armenian and Greek Orthodox churches in Jerusalem and a senior Roman Catholic official condemned the bill as “disgraceful.”They said its inclusion on the agenda of a government committee meeting scheduled for Sunday reneged on previous commitments to withdraw the law.

Swathes of Jerusalem are held by various churches, in many cases under long-term leases from the state. The churches then sublet the properties on the commercial market.In February, Jerusalem municipality began enforcing tax collection on church property—excluding places of worship.

Separately, the Knesset was working on a law that would allow the state to intervene in the resale of leases to commercial property developers.

The religious leaders protested by closing the Church of the Holy Sepulchre, the site in Jerusalem where Jesus is believed to have been crucified and buried.

Israeli authorities then froze both the tax measures and the legislation, committing to a dialogue with the churches over the issues.

In their letter Friday, the churchmen said Netanyahu himself had written to them in July giving “assurances to withdraw the legislation.”

“We were astonished to realize that this disgraceful bill was listed on the agenda of the ministerial committee for legislation this coming Sunday,” it said.

“We are therefore compelled to call yet again for Your Excellency’s urgent intervention to stop this bill once and for all.”

The cabinet office listed the bill among several “added to the agenda” of Sunday’s meeting.

Listed as a bill for tenants’ rights, it aims to safeguard residents of properties assigned to “various bodies” on 99-year leases during the 1950s.

The bill’s sponsor, MK Rachel Azaria (Kulanu) says it was meant to solve the problem of “thousands of Jerusalem residents who could lose their homes due to the demands of developers.”