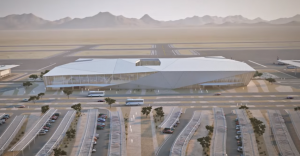 Jordan protested the opening of a new international airport just kilometers away from its border with Israel, local media reported on Sunday.

The Jordanian government has expressed concerns about the Ramon international airport as early as 2015.

The Kingdom’s official opinion is that the airport will violate its air sovereignty, something enshrined in international law, simply by being so close to its border – the air strip is only 18 kilometers inside Israeli territory.

Government officials talking in parliament in April 2018 said they were still convinced that “Israel was doing something illegal” but that the Israeli government had chosen to ignore Jordan’s concerns.

Al-Mamlaka on Sunday quoted an official Jordanian source as saying that Jordan had now lodged an official objection with international authorities.

It was’t known what the effects of this complaint would be, with nobody in Israel doubting that the airport’s inauguration, set for January 22nd, would go ahead.

The Ramon international airport will serve the Southern resort city of Eilat, a port on the Red Sea that sits just between Jordan and Egypt.

A $500 million project in the Negev desert, it will begin operating internationally in March, according to the Israel Airports Authority.

Ramon will replace the two smaller Eilat airports, helping to act as a new gateway to Southern Israel. Domestic flights currently land in an inner city airport, which has made traffic in the burgeoning city a major issue, while raising safety concerns.

International flights currently arrive in a military airfield some 60 kilometers away, but have more than doubled each year over the last few years.

The Israeli government hopes this new will simultaneously facilitate greater domestic traffic, and boost the attractiveness of the region for European tourists.

The airstrip will be able to hold 60 planes with a 3.6km runway capable of accommodating large aircraft.

It is also part of a larger reshuffle of Israel’s air infrastructure. Israel currently only has one international airport between Tel Aviv and Jerusalem, which is slated to put 25 million passengers through its gates in 2020.

“Israel didn’t have a second international airport” when it was at war in Gaza in 2014 and Hamas fired missiles toward Tel Aviv’s Ben Gurion Airport, and several airlines cancelled flights for multiple days when the conflict was at its peak, an IAA spokeswoman said.

Initially slated to serve 2 million passengers a year, the airport’s capacity will be boosted to 4.5 million by 2030.

The Negev, which comprises most of Israel’s south, only attracts five percent of tourists who visit Israel. The airport is part of a larger campaign to balance out tourism revenue.

“When it’s very cold in Europe, let’s say in December, January and February, we have very mild temperatures in the Negev,” the tourism ministry’s Uri Sharon told journalists on a tour of the sparsely populated region.

The airport itself is another representation of Israel’s fraught relationship with its two neighbors. Equipped with the world’s tallest anti-missile fence, 26 meters high and 4.5 kilometers long, it is still slated to be a transport hub for the region as a whole.

Many tourists currently coming from Europe are choosing to fly to Eilat as a way of getting into neighboring countries. Foreign traffic at border posts in the vicinity have increased in direct proportion to the number of direct flights from Europe to Ovda between 2017 and 2018, according to official figures released in a report in Israeli finance paper Globes.

The airport is named for Ilan and Assaf Ramon. Ilan Ramon, a former air force pilot, was Israel’s first astronaut, and was tragically killed when US space shuttle Columbia burned up on reentry in 2003. His son Assaf, also an army pilot, was killed during a training accident in 2009.

Their wife and mother Rona, a holistic therapist, was a major figure in Israeli life, and a respected activist for youth education. She died in December 2018, at 54, of pancreatic cancer.

In anticipation of the first flight landing at Ilan and Assaf Ramon Airport in Eilat, Prime Minister Binyamin Netanyahu contacted the control tower in the field.

Prime Minister Netanyahu, “Ramon, this is Arkia 763. We are very moved to be on the first flight to Ramon Airport. We see you clearly. The airport is very important vis-à-vis our national security, the development of the Negev and Eilat, and the development of civil aviation.

“This truly is very, very moving. This moment and this airport cause us to remember Ilan, Asaf and Rona Ramon. The Ramon family will be with us here. We are due to land.”