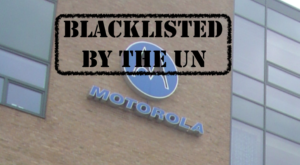 Foreign Minister Yisrael Katz responded to the black List, saying that “the UN Human Rights Council’s announcement of the “black list” of business companies is a shameful surrender to the pressures of countries and organizations interested in hurting Israel, even though most countries in the world have refused to join this political pressure campaign.”

“The Commissioner’s decision to continue on the Human Rights Council’s anti-Israeli line is a blemish on the UN Human Rights Council. In the words of the commissioner, it has become a server tool and partner of the boycott movement, even though her statement has no legal significance for the list,” Katz added.

According to the minister, “The Human Rights Council is a body made up of states between them and human rights has no connection whatsoever. Since its inception, the Council has taken no steps to protect human rights, but has only protected some of the world’s darkest regimes.

The commissioner failed to maintain the respect of the UN and save what is left of the honor of the Council and the Commission. This decision will have implications for our relationship with the Commission. The State of Israel will not accept discriminatory and anti-Israeli policies and we will work in all ways to prevent such decisions from being implemented.”

Shai Alon, head of the Beit El Council, responded to the list. “The United Nations published its Jewish selection today, just like in World War II. It is a disgrace, a disgrace to an organization that is all pro-Palestinian on the one hand and silent when it comes to the genocide in Syria and the murder of women in Saudi Arabia and on the other, and damages the delicate fabric of life here in Israel.”

Annual report of the United Nations High Commissioner for Human Rights (OHCHR) and reports of the Office of the High Commissioner and the Secretary-General Human rights situation in Palestine and other occupied Arab territories.

Database of all business enterprises involved in the activities detailed in paragraph 96 of the independent international fact-finding mission to investigate the implications of the Israeli settlements on the civil, political, economic, social and cultural rights of the Palestinian people throughout the Occupied Palestinian Territory, including East Jerusalem

Report of the United Nations High Commissioner for Human Rights

(a)    The supply of equipment and materials facilitating the construction and the expansion of settlements and the wall, and associated infrastructures;

(b)    The supply of surveillance and identification equipment for settlements, the wall and checkpoints directly linked with settlements;

(c)    The supply of equipment for the demolition of housing and property, the destruction of agricultural farms, greenhouses, olive groves and crops;

(d)    The supply of security services, equipment and materials to enterprises operating in settlements;

(e)    The provision of services and utilities supporting the maintenance and existence of settlements, including transport;

(f)     Banking and financial operations helping to develop, expand or maintain settlements and their activities, including loans for housing and the development of businesses;

(g)    The use of natural resources, in particular water and land, for business purposes;

(h)    Pollution, and the dumping of waste in or its transfer to Palestinian villages;

(i)     Captivity of the Palestinian financial and economic markets, as well as practices that disadvantage Palestinian enterprises, including through restrictions on movement, administrative and legal constraints;

(j)     Use of benefits and reinvestments of enterprises owned totally or partially by settlers for developing, expanding and maintaining the settlements.

When contacting companies, OHCHR included in the communications, wherever possible, all relevant entities with respect to that particular situation of concern, including parent companies and their subsidiaries, franchisors and franchisees, local distributors of international companies, partners and other entities in relevant business relationships. In some of these cases, further research by OHCHR revealed relevant business entities, such as parent companies or subsidiaries, that were not initially named in the submissions received in notes verbales from Member States or through the open call for submissions from interested stakeholders.

[1]   While resolution 31/36 refers to the occupied Syrian Golan, paragraph 17 requesting production of a database and the report of the independent international fact-finding mission to which it refers pertains to the Occupied Palestinian Territory only. Business enterprises involved in activities related to the occupied Syrian Golan therefore do not fall within the present mandate.

[7]   With respect to three listed activities (c), (i) and (j), OHCHR did not identify any business enterprise satisfying the standard of reasonable grounds to believe involvement consistent with the definitional approach set out above.

G. Removal from the database