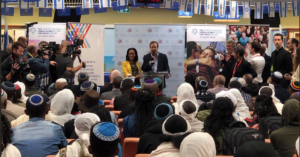 “The Operation Yehudith campaign to bring Ethiopian Jews to Israel is a very moving moment, and all of Israel welcomes you,” said Jewish Agency Chairman Isaac Herzog at a special reception at Ben Gurion Airport.

Eighty Ethiopian Jews landed in Israel on Monday in the first wave of new immigration since the government said last year that it would let some of the 8,000 remaining community members join relatives in Israel.

Local Ethiopian-Israelis welcomed the newcomers after years of delays. The newcomers are members of the Falash Mura community – the descendants of Jews who converted to Christianity under pressure from missionaries in the 19th and 20th centuries. While the Israeli government recognizes their Jewish roots, it does not consider them fully Jewish, so they require special approval to immigrate that has not always been forthcoming.

Atersau Baiye, 61, said he had been waiting for over 12 years to come to Israel and be reunited with his daughter, who lives in Tel Aviv.

“I am very happy to be here and excited to see my daughter, but it’s a mixed feeling,” he said. Baiye said that because he immigrated with his wife and six children, he was forced to leave behind in Ethiopia two adult children who were not immediately eligible to immigrate. “I don’t know if we will see them again.”

Alisa Bodner, spokeswoman for an Ethiopian Jewish activist group, said she was “far from satisfied” by the slow trickle of Ethiopian immigration, long-stalled despite government promises to bring all remaining members of the community to Israel.

“This is a continuation of the discriminatory practices against Ethiopian-Israelis emanating from this current government,” she said.

🇮🇱🇮🇱 OMG Can you feel that? Tonight we brought 80 Ethiopians home to their families and friends, to their people in #Israel @JewishAgency @Isaac_Herzog pic.twitter.com/sWT56hsAvY

The activists renewed their calls for Israel to make good on its 2015 promise to bring all remaining members of the Ethiopian Jewish community to Israel. The government never approved a budget for the move and the slow trickle of immigration ground to a halt over a year ago. Last fall, the government announced it would absorb 1,000 of the remaining 8,000 Jews in Ethiopia, frustrating community members.

Operation Solomon-In 24 hours some 14,000 people were airlifted out of Addis Ababa and flown to safety in Tel Aviv. Today, Israel’s Ethiopian community boasts over 140,000 members who continue to play important roles in all facets of Israeli society.

The bulk of the Ethiopian Jewish community was airlifted to Israel in major clandestine operations in the 1980s and 1990s.

Ethiopian Jews who have made it to Israel complain of racism, lack of opportunity and endemic poverty. Last week, thousands of Ethiopian-Israelis marched through major roadways in Tel Aviv to protest police brutality and discrimination.

Despite the challenges, Baiye said he is ready to start his new life. “I’m going to work hard, earn a living and live like everyone else.”