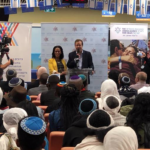 “The Operation Yehudith campaign to bring Ethiopian Jews to Israel is a very moving moment, and all of Israel welcomes you,” said Jewish Agency Chairman Isaac Herzog at a special reception at Ben Gurion Airport.

Eighty Ethiopian Jews landed in Israel on Monday in the first wave of new immigration since the government said last year that it would let some of the 8,000 remaining community members join relatives in Israel.

Local Ethiopian-Israelis welcomed the newcomers after years of delays. The newcomers are members of the Falash Mura community – the descendants of Jews who converted to Christianity under pressure from missionaries in the 19th and 20th centuries.  Continue Reading »