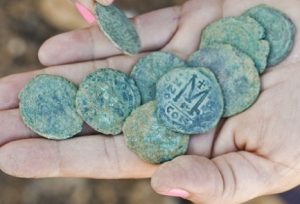 The excavation, which began last June as part of roadwork to expand a section of Highway 1 running west of Jerusalem, uncovered what was a large two-story building and a wine press — part of a larger complex apparently used by Christian pilgrims on their way to Jerusalem.

Annette Lands-Nagar, head of the excavation for the Antiquities Authority, told Israel Hayom Sunday that the treasure “was found next to the building in a pile of large fallen rocks. It seems the owner of the coins wrapped them up in a wallet made of cloth and hid it in a wall niche at a perilous time, hoping to return later to collect it, something we now know did not happen.”

The faces of three important Byzantine emperors are impressed onto the coins: Justinian I (483-565 C.E.), Maurice (539-602 C.E.) and Phocas (547-610 C.E.). The coins were minted in three different locations, Constantinople, Antioch and Nicomedia, all of which are in present-day Turkey. The front of each coin shows the image of the emperor in military uniform carrying crosses, and the back shows the coin’s value.

Lands-Nagar said hiding the treasure was likely connected to the Sassanid Persian invasion of the area in 614 C.E., partially responsible for the end of Byzantine control of the land of Israel. Because of the threat of invasion, people living in the site apparently hid their money in a wall but were unable to get it back. The building and the larger complex it is part of are close to a Byzantine church discovered near Highway 1 last year.