The secluded “Diplomatic Compound,” built for senior Palestinian Authority officials on subsidized land, is one of the symbols of what many Palestinians think is wrong with their leaders – that they are cut off from the people and award themselves special privileges.

The breakdown of trust is likely linked to overall dissatisfaction with Abbas’ performance after 10 years in power, twice his lawful term. He hasn’t delivered on promises to lead Palestinians to statehood, and the prospect of open-ended Israeli military occupation, already in its 50th year, darkens every aspect of life in the West Bank.

A recent poll found that almost all Palestinians — 95.5% — believe there is corruption in Abbas’ government. Nader Said, a veteran pollster, surveyed 1,200 people in the West Bank and Gaza Strip last month. Among Gaza residents scoring the performance of the territory’s Hamas rulers, the figure was 82 percent.

“This is the highest rate I have ever seen in all the polls I have done,” Said, who runs an independent polling agency called AWRAD, told The Associated Press. The margin of error was 3 percentage points.

Experts say perceptions of corruption tend to be overblown. The World Bank, for example, found in a survey of Palestinians several years ago that far more people believed there was corruption than actually experienced it.

But critics say secretiveness among Abbas and his advisers and a lack of responsiveness have fanned suspicions among the public that the political elite enjoy privileges and special deals at the expense of everyone else.

The World Bank, which helps the Palestinian Finance Ministry, said the delays stem mainly from technical problems and management challenges after a switch to a new accounting system. One option being considered to deal with what it called a “challenging reform” is to provide more direct technical support to the ministry’s accounting department.

But Aman researcher Muayad Afaneh said “there is a great lack of transparency in the budget, and this opens the door to everything negative,” including potential mismanagement or corruption.

Prime Minister Rami Hamdallah said his government is vigilant about stamping out any corruption. Suspicions of serious wrongdoing have been rare, but suspects “will be brought to justice,” he said at a recent news conference.

Hamdallah played down his government’s negative image, suggesting it was fueled by gossip. “People can say anything,” he said.

Such dismissive attitudes are part of the problem, said the pollster, Said.

“The leadership style of President Abbas is … perceived as elitist,” he said. “He is surrounded by a very small group of people … He does not care about having a debate in the country on the issues.”

Public opinion may not matter much at a time when elections seem distant, but the bubbling discontent could erupt any time. The negative view of the Abbas government also provides an opening for his bitter rival, the Islamic militant Hamas.

The Palestinian political system atrophied as a result of the 2007 split that produced separate governments — one run by Hamas in the Gaza Strip and the other by Abbas and his Fatah group in autonomous enclaves in 40 percent of the West Bank.

The Palestinian parliament, which once provided some oversight, stopped functioning, and Abbas and Hamas have been ruling by decree. Both governments have rewarded party faithful with jobs and other perks.

A blockade of Gaza and restrictions on Palestinian development in the West Bank hold back the economy and keep unemployment in the double digits. Foreign aid is shrinking, further straining the Palestinian Authority budget.

In tough times, displays of privilege like the gated community outside Ramallah seem especially jarring.

A sign next to the guard booth at the gate reads, “Diplomatic Compound.” A road winds down a slope past dozens of two-story villas and several low-rise apartment buildings. A shopping mall is under construction.

A guard prevented an Associated Press cameraman from entering the compound, saying filming requires permission from Majdi Khaldi, an adviser to Abbas. Khaldi did not respond to emailed questions about the compound or return phone calls. Abbas and Khaldi attended the compound’s opening in 2010.

Last year, Khalidi’s role in the project caused a social media uproar when a 2011 letter he sent to Bahrain’s foreign minister was leaked. In the letter, Khaldi asked for $4 million for the complex, arguing that the presence of the villas helps prevent the spread of Israeli settlements in the area.

The compound was built by a housing cooperative that obtained public land for 60 percent of its market value, said a government official with knowledge of such land transfers. The official spoke on condition of anonymity because he was not authorized to discuss the matter with the media.That meant cheaper properties for the members of the cooperative.

The compound was initially intended for members of the diplomatic corps, but the cooperative was expanded to include other senior figures from the government, security agencies and Fatah, said the official. Eventually, some private citizens were also admitted. 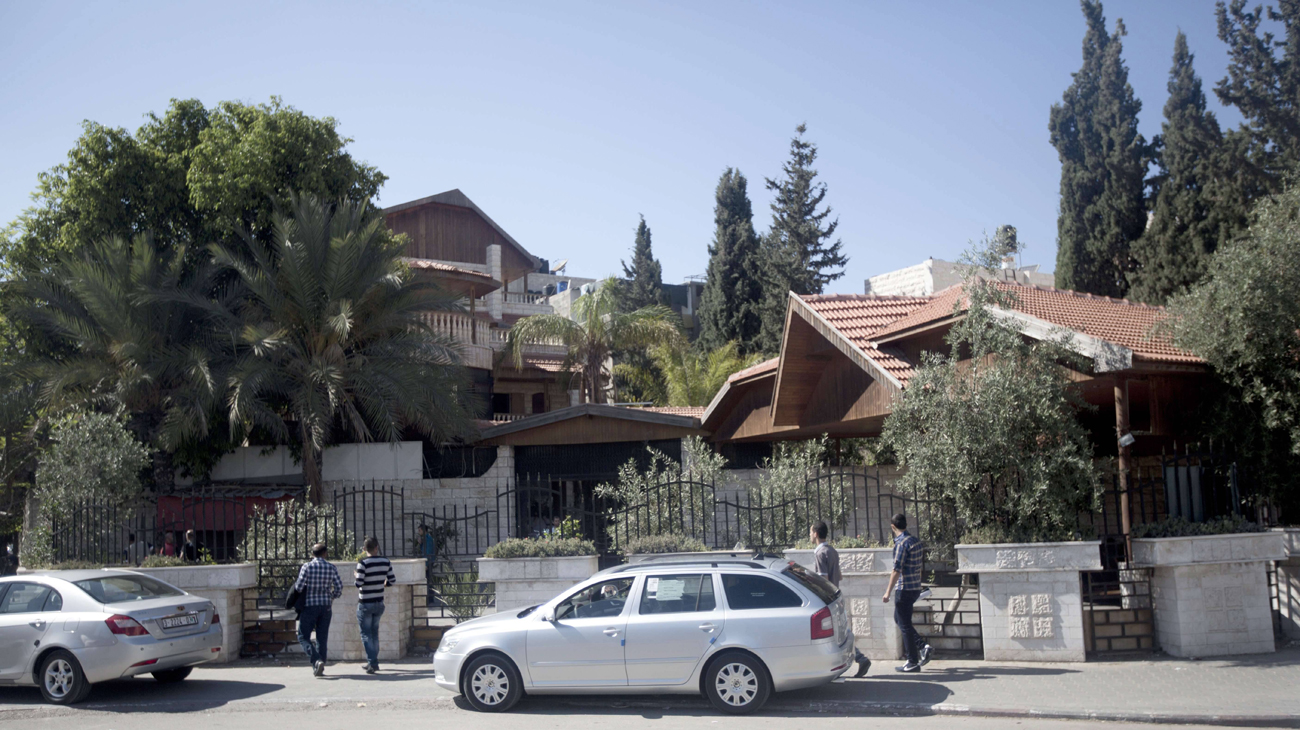 Compound residents were given the right to sell their homes – potentially at a greater profit if they sold at the market value of the land.

Afaneh, the anti-corruption campaigner, said his main concern is the lack of transparency.

Hamdallah’s predecessor, Salam Fayyad, was credited by international donors with making public spending more transparent. Fayyad resigned in 2013 amid tensions with Abbas and Fatah, including over the budget. Abbas then installed Hamdallah, an academic without political experience.

“Fayyad used to host us and brief us every year,” Afaneh said. “In the current situation, we don’t hear from the government or the Finance Ministry.”Finance Ministry officials did not respond to requests for comment.

The government does post its spending plans online. But the listings are bare-boned and often puzzling, said Afaneh.

Afaneh said plane expenses shouldn’t be listed under development and that portraying one-fourth of the development budget in that quarter as “other” raises questions.

The public has complained loudly over issues of nepotism and disproportionately high salaries for select senior officials, some of whom make $10,000 a month, about 10 times the average for government employees.

“It’s rare to find someone who got a job based on his qualifications,” said Diaa Abu Dhaher, 23, who has an undergraduate degree in business administration but works as a waiter in a Ramallah restaurant.

Hanan Ashrawi, a senior official in the Palestine Liberation Organization, said public perceptions are exaggerated and that “the actual practice of corruption is not that high.”

“The conditions on the ground are so negative and so painful, and the degree of frustration is so high,” she said, “that people look at the leadership with a very negative, critical eye.”