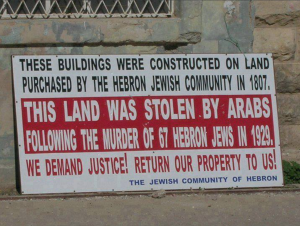 Until the Arab who sold 2 Hevron homes to Jews turns himself in, Abbas’ PA police will not release brother & 17 yr-old son from jail.
• Jewish activists from Hebron call on Israel’s gov’t to intervene, provide protection for Arab seller and his family.

In the past several days the Palestinian Authority has arrested the brother and son of a Palestinian Arab man who sold two houses to Jews in Hevron, Arutz Sheva has learned.

One of the new Hevron homes – Courtesy

When a contact approached the PA to appeal for the release of the two – one of whom is a 17-year-old boy – he was told they would not see the light of day until the seller hands himself in to PA police. Were he to do so, he would likely be subjected to torture and possible execution – the punishment under Palestinian Authority law for selling land or property to Jews.

Hevron Jewish activists have called on the Israeli government to respond by permitting Jewish residents – who were evicted from the two structures shortly after moving in – to return, as well as by providing protection to the Arab seller and his family.

Jewish activist Shlomo Levinger urged the government to act now, as an appropriate response to the murderous Palestinian terror attacks of recent weeks.

“Specifically now, in these weeks during which the nation of Israel sustained loss and grief, we say that there is another way,” namely building and expanding Jewish life in the ancient holy city.

“I see in the redemption of the houses at this time a much-needed revival for the Jewish people in the land (of Israel),” he added, and called on authorities to end their “selective” policy of applying rules to Jews in Judea and Samaria which are not applied anywhere else in the country.

“In addition, I call on the government to give urgent protection to the Arab seller and to his family members. A lack of intervention by the government in the (PA) policy of killing Arab sellers, amounts to an approval of this offense.”