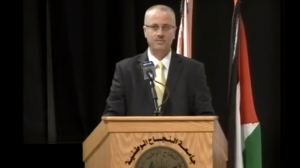 The Palestinian Authority (PA) government, headed by Rami Hamdallah, on Tuesday warned against Israel’s “escalating policy” following UNESCO’s recent resolutions recognizing the Muslim right to the Temple Mount and the Cave of the Patriarchs in Hevron, while ignoring the Jewish connection to those sites.

Israel’s Border Policemen man Security checkpoint at the entrance to the Cave of the Patriarchs in Hevron, burial place of Abraham, Isaac, Jacob and their wives, the Patriarchs and Matriarchs of the Jewish people – Photo: Police spokesmen

An official statement released after a meeting in Ramallah said that celebrations marking the 50th anniversary of the “occupation” of Jerusalem included a light and sound show in Silwan which, the statement claimed, was based on “falsification of the historical narrative of the Holy City.”

The statement further claimed that Israel is re-implementing a policy of removing Arab residents from the Sheikh Jarrah neighborhood, including a decision to evict several families over a claim that the building in which they live belonged to a Jewish family before 1948.

The PA government noted that the escalation of the Israeli government’s “settlement” activity requires the immediate intervention of the international community in order to put an end to it and requires international protection for the Palestinian people and its holy sites and serious action by the Arab and Islamic nation.

“Israel was established on the ruins of the Palestinian people and has refused since day one to implement UN resolutions 181 and 194, which deal with the refugees’ right to return to their homes from which they were expelled,” the statement said.

The statement urged the international community to reject any proposal for Israel’s candidacy for any international position, including a seat on the Security Council, as this would be considered an encouragement to its “colonialism”, “crimes” and “disobedience of international law.”

Before the acceptance of hate, blood and death as part of their culture, the REAL Palestinians were actually proud the Muslim migrants came to live in the Mandate, as reported by a young Robert Kennedy, 2 decades before being shot dead by an Arab Jordanian.

The children of those Muslim migrants are the very ones now abandoning their own personal heritage, in favor of stealing the history, and the homeland of the Jewish People….AND the 10’s of $Billion$ (since 1967) from the world’s Christian population, to make it happen.