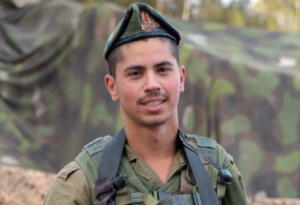 On their way home from synagogue, 3 Muslims surrounded Reuven Abbou, and his sister. Protecting his sister, the 3 cut his face with a broken bottle. That’s when he decided to make aliyah, and now he calls on fellow French Jews to do the same.

An awful experience three years ago inspired Cpl. Reuven Abbou, 20, a combat soldier in the Haruv Battalion in the Israel Defense Forces Kfir Brigade, to immigrate to Israel and serve in the IDF.

That fateful day, Abbou walked out of the synagogue in the French city of Lyon with his younger sister, Leah. On their way home, three Muslim youths surrounded and began cursing them. When Abbou tried to protect his sister, the three attacked him and cut his face with a broken bottle.

“It was an awful moment. They started cursing us with crude, racist, anti-Semitic words. They attacked us just because we were Jewish,” Abbou says.

The attackers fled and left Abbou bleeding in the street, his sister trembling in fear.

“I’ll have a scar on my cheek all my life, about 7 centimeters [3 inches] long. That was the moment I decided France was no place for me,” Abbou says.

When he finished high school, Abbou pursued his dream. A year ago, he made aliyah. His brother arrived in Israel a month before he did, and it seems that the rest of the family is on its way.

“I’ve tried to convince them to make aliyah, and it looks like I succeeded. I’m happy serving in the army and I call on all the young [Jews] of France to make aliyah,” Abbou says.