After Being Exiled for Visiting Jewish State, Bangladeshi Returns to Israel 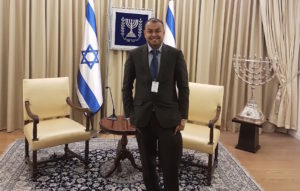 Growing up in Bangladesh, a majority Muslim country & raised in an anti-Israel education system, Dr. Shadman Zaman, 25, returned in Israel on Wednesday from the UK, after being banned from his home country for visiting Israel in February.
– Dr. Shadman Zaman, says, “I’m a stateless Zionist.”

Banned from his home country after visiting Israel in February, the first Bangladeshi national to ever visit, returned to the Jewish state this week for an advocacy trip with a Zionist Federation of Great Britain and Ireland delegation.

Dr. Shadman Zaman, 25, arrived in Israel on Wednesday from the UK, where he currently resides. He spoke with The Jerusalem Post in Tel Aviv about his journey from being raised in an antisemitic and anti-Israel education system to becoming a loud and proud pro-Israel activist who is converting to Judaism.

Growing up in a majority Sunni Muslim country, Zaman said he was surrounded by classic antisemitism. “Even in our school books it said ‘Jews are the mirror of Satan’ and ‘Zionists control the world,’” he told the Post.

He gives credit to his aristocratic, well-connected and open family upbringing for his ability to formulate his own opinions of Israel.

“Even my school, which used a Cambridge curriculum, used to encourage hatred toward Israel. But, luckily, my home was different,” he said.

The Case for Israel – Screenshot

For Zaman, Alan Dershowitz’s book The Case for Israel was a game-changer. After reading it at age 12, Zaman developed a thirst for Zionist books, which his late grandfather smuggled into the country for him.

Zaman was inspired by his grandfather, whom he described as one of the earliest Bangladeshi Zionists.

“My grandfather was one of the first people to speak out to say that Israel has a right to exist,” Zaman said, adding that “Bangladesh was founded at the aspiration of Bengali people just as Israel was for the Jewish people.”

“Israel helped us during our own liberation struggle, but that part of the history is not mentioned,” he lamented.

Israel was one of the first nations to recognize Bangladesh in 1972 following the Bangladesh Liberation War, however, the country rejected this recognition. “Bangladesh rejected Israeli recognition for Arab aid,” Zaman noted, adding that his grandfather went against the grain and advocated Israel-Bangladesh relations.

Zaman took up that torch, and as a young adult, alongside 22 other like-minded Bangladeshis, he tried to establish a committee to encourage Bangladesh-Israel relations. The effort failed and Zaman recalled that some of the group were imprisoned and others killed by Islamist extremists because of their vocal activism.

Zaman received death threats in the past but said he was protected by his family’s connections. But last year, his parents encouraged the qualified doctor to move to the UK, believing that Bangladesh was no longer safe for their son.

He moved to the UK and later traveled to Israel for the first time.

His grandfather passed away shortly before, without ever making it to Israel. “Before he died, he said the first country I should visit is Israel… He gave me his shoes and his watch, and when I came to Israel for the first time I wore his shoes so that he felt like he was walking in Israel with me,” Zaman says.

Zaman continues to advocate for relations between the two countries, despite being warned not to step foot in Bangladesh again because of his visit to Israel. Sources, he said, have conveyed a message to his parents that should he set foot on Bangladeshi soil he will be arrested at the airport and charged with high treason.

This was the fate of journalist Salah Choudhury, who attempted to travel to Israel in 2003 and was subsequently imprisoned and charged with treason, sedition and blasphemy.

In the UK, Zaman actively fights against antisemitism and stands up for the State of Israel.

While doing his master’s in public health at the Queen Mary University of London, he had his first opportunity to meet Jewish people. “The experience of integrating into the London Jewish community was heartwarming… They were really welcoming,” he said.

“I grew up as a monotheist with respect for all religions and I always felt a huge connection to the Jewish people… the most oppressed people in history who still didn’t give up on their faith even in the face of all the oppression they faced,” he said.

He started taking part in Jewish activities and festivals and got involved with the Jewish Society on campus. As he got to know members of the community and several rabbis, Zaman decided that he wanted to be a part of the Jewish faith. “For me, Judaism is the real deal,” he said, observing how many Muslim traditions are derived from Judaism.

He began his conversion four months ago and hopes to emigrate to Israel and do a Ph.D. here in the years to come.

Zaman’s ultimate goal remains the establishment of relations between Bangladesh and Israel, which he sees as hugely beneficial for both countries.

”I’m getting more traction in Bangladesh because of what I’m doing in the UK, than [from] anything I did while living in Bangladesh,” he said, adding that he is now getting press coverage in his former home country, and while he may be painted in a negative light, his message is still being conveyed.

Zaman also asserted that “Britain is really becoming antisemitic and anti-Israel.” He said the situation is aggravated by the emigration of Jews and Zionists from the country. “In Bangladesh, there are no Jews and it’s one of the most antisemitic countries,” he warned.

After his visit to Israel in February, he felt a particularly keen sense of responsibility to share his positive experience of the country and to quash propaganda about it. He became the secretary of Queen Mary University’s Jewish and Israel society and is also active in various “Friends of Israel” groups.

“I made a lot of enemies but it doesn’t matter. I’m here to stand up for the truth.” He has already received 37 death threats while living in the UK.

Zaman has made a name for himself as a Zionist activist and has worked with organizations such as Stand With Us. He was also invited to speak at a World Zionist Organization conference in London last month.

“Amid growing antisemitic activity in the world, a meeting with a man like Shadman Zaman warms his heart,” said WZO vice chairman Yaakov Hagoel. “We are used to thinking that there is no chance that a man with a background like Zaman’s – a Muslim from a country like Bangladesh – will cross the fence. At a conference in London a few weeks ago, Zaman recounted his life story in a lecture he gave to hundreds of conference participants.

“His desire to fight antisemitic injustices, to convert to Judaism and to give up his Bengali citizenship in order to enter the State of Israel is exceptional and inspiring,” Hagoel added.